Harland and Wolff unions believe shipyard should be renationalised 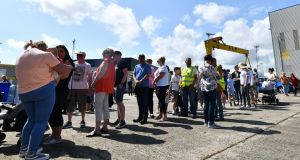 Harland and Wolff workers hosting a family fun day for people who have supported their fight to save the shipyard. Photograph: Colm Lenaghan/Pacemaker

Shipyard workers in Belfast are hoping Harland and Wolff will be thrown an 11th hour lifeline as the clock ticks down to the historic shipyard potentially being forced into administration.

Union leaders have warned that unless the UK government steps in with a rescue plan administrators could seize control of Harland and Wolff as early as Monday.

So far the UK government has not signalled any appetite to intervene in what it has said is “ultimately a commercial issue”. However, Susan Fitzgerald, regional co-ordinating officer with the trade union Unite, said time was running out for the shipyard which built the Titanic in east Belfast.

Speaking on Sunday at a family fun-day organised at the shipyard by its 123- strong workforce to thank the wider Belfast community for their support in their fight to save the yard, Ms Fitzgerald said it was was crucial that Harland and Wolff was not sold to a “brand stripper”.

She said “would-be bidders and vultures” had previously made bids for Harland and Wolff, which she said were “never credible”.

Ms Fitzgerald said Harland and Wolff workers were now “extremely concerned at speculation that the MJM group” had been identified as a potential bidder at this late stage.

The Newry-based MJM Group, which is owned by Brian McConville, is a leading cruise ship refurbishment specialist which last year carried out a £50 million complete refit of the luxury cruise liner Azamara Pursuit at the Harland and Wolff shipyard.

Ms Fitzgerald claimed the MJM Group had previously been involved in “exclusive negotiations” to acquire Harland and Wolff, but had “abruptly” pulled out two weeks ago.The MJM Group has not commented on these claims.

However, Ms Fitzgerald said: “We know that MJM has already outlined its plans to Invest NI and the department for the economy – plans in which the workers are surplus to requirements.”

Both Unite and the GMB trade union believe the best option for Harland and Wolff is for the UK government to re-nationalise the yard, which is currently owned by Norway-headquartered Dolphin Drilling Holdings Limited.

This is a relatively new company that was established just last month after its former parent, Dolphin Drilling ASA, previously known as Fred.Olsen Energy, filed for bankruptcy.

Dolphin Drilling ASA had been trying to find a buyer for the historic Belfast shipyard for over a year.

Ulster Unionist councillor and former lord mayor of Belfast Jim Rodgers said he had been told that a “big issue” for potential buyers was a pension deficit at Harland and Wolff which he understood “is quite high”. He believed that this “has frightened a number of people away”.

The most recent set of published accounts for Harland and Wolff Group plc, for the year ended December 2016, show that the group’s defined pension benefit scheme had “2,633 pensioner and deferred members”.

Harland and Wolff outline in the accounts that it made cash contributions of £2.1 million in 2016 and 2017 to the scheme, and warned that the “continuing deterioration of the group’s legacy pension scheme, mainly due to lower discount rates, now represents a significant burden”.

Ms Fitzgerald said she was aware that calls to re-nationalise the shipyard have made “some people uncomfortable”.

“People have talked about whether it is morally correct to put public money into the shipyard, and if you are one of those people struggling with that concept let me give you a figure to think about from a different perspective.