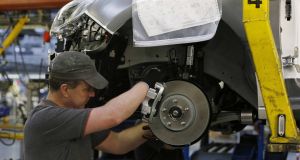 An employee works on the Astra production line at the Vauxhall Motors plant in Ellesmere Port, Cheshire. Photograph: Phil Noble/Reuters

PSA, the French carmaker that owns Vauxhall, will pull all production from Ellesmere Port and switch to a plant in mainland Europe if Brexit renders the British factory unprofitable.

Chief executive Carlos Tavares said the business had earmarked a site in southern Europe to build future Vauxhall Astra and Opel Astra cars if the UK was not able to achieve a satisfactory outcome when leaving the EU.

The move would likely to lead to the closure of the Cheshire plant in northwest England that employs more than 1,000 workers. It would reduce the company’s presence in the UK to its van plant in Luton, which employs just over 1,000 workers.

“Frankly I would prefer to put it [the Astra car] in Ellesmere Port but, if the conditions are bad and I cannot make it profitable, then I have to protect the rest of the company and I will not do it,” he told the Financial Times. “We have an alternative to Ellesmere Port.”

His warning comes as new prime minister Boris Johnson prepares to renegotiate Britain’s exit deal with the EU or leave the bloc without one on October 31st, which will trigger customs checks and tariffs for importers and exporters.

Although Mr Tavares said in June that Britain’s relationship with Europe must be secured after Brexit, his latest remarks show growing concerns that no-deal or even a negotiated settlement will hit profits because of customs checks and tariffs.

On Friday, the UK’s car trade body, the Society of Motor Manufacturers and Traders, warned Mr Johnson a no-deal Brexit posed an “existential threat” to the industry.

Of all the UK’s car plants, Ellesmere Port is the most heavily exposed – 80 per cent of its production is exported to Europe and about three-quarters of its components are imported.

Production of Vauxhall and Opel Astras is currently split between Ellesmere Port and Gliwice in Poland.

Last month PSA said it planned to build the next Astra from 2021 at Rüsselsheim in Germany, with the UK as a second plant “conditional on the final terms of the UK’s exit” from the EU.

“We need the second capacity to fulfil the market needs,” Mr Tavares said, adding that the company had to make a decision within “a few months”.

His urgency echoes warnings from leaders across the UK car industry about the potential impact of Brexit on production. Investment in new projects by carmakers and their suppliers has fallen by 80 per cent since 2016, while both Ford and Honda have announced closures of British sites.

There is also uncertainty over the future of jobs at Nissan’s Sunderland plant after the company announced 12,500 would go globally as it cuts the number of models it produces.

Earlier this month BMW’s Oliver Zipse, who has been named as the group’s next chief executive, said the German company had already begun moving some engine production out of the UK in preparation for Brexit.

PSA bought Vauxhall and Opel from General Motors in 2017, and has since restored the serially lossmaking business to profit. Last year, the two brands posted a profit of €859 million, their first since 1999.

Under PSA’s ownership, Ellesmere Port has laid off close to 900 workers and moved to a single shift in order to become competitive enough to win the work.

1 How much state pension will I get next year?
2 Up or down – how much is your Local Property Tax this year?
3 Am I crazy to consider switching to an Ulster Bank mortgage?
4 PTSB sells €1.4bn of mainly interest-only buy-to-let loans
5 CRH sells Brazilian cement business for $218m
6 Oxford Covid vaccine trials offer hope for elderly
7 Fall in mortgage drawdowns, Brexit threat to services, and advice on your pension
8 Brexit to curb services trade with UK, accountants group warns
9 Mortgage drawdowns fall by almost a third compared to 2019
10 How long can Government afford to keep State pension age at 66?
Real news has value SUBSCRIBE