Intel gets green light for $4bn development at Leixlip 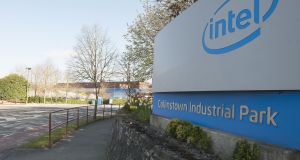 Kildare County Council has given the green light to Intel for its planned $4 billion (€3.53 billion) manufacturing fabrication facility in Leixlip.

Kildare Co Council has given the green light to Intel for its planned $4 billion (€3.53 billion) manufacturing fabrication (FAB) facility in Leixlip.

There were a small number of objections, including one from local farmer Thomas Reid, who has opposed expansions of the plant in the past.

Kildare Co Council would enjoy a windfall of €9.72 million if Intel proceeds with the development. This comes three years after Intel secured planning permission for another expansion, bringing the total potential investment at the site to $8 billion and could employ up to 6,000 construction workers at peak and 1,600 full time jobs on completion.

The projects would represent the largest single private investment in the history of the State if it proceeds. Consultants for Intel told the council that the company has already invested $12.5 billion (€11.1 billion) on its site at Leixlip.

Even before the council granted planning, environmentalist, Peter Sweetman wrote to the council last month to say that he would be appealing any decision to to the appeals board or to the High Court.