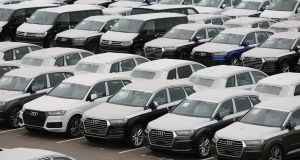 The firm, which sells new and used vehicles made by multiple manufacturers, expects annual underlying profit to fall.

British car dealership Lookers said on Friday its top boss and operations chief will step down immediately after weak sales led to a second profit warning in less than four months, sending its shares down as much as 30 per cent and rattling peers.

The Lookers Group incorporates the Charles Hurst dealership, which has operations in Dublin and Belfast. Among the models it stocks are Aston Martin, Bentley, Maserati, Hyundai, Volkswagen and Renault.

The London-listed firm, which sells new and used vehicles made by multiple manufacturers, expects annual underlying profit to fall by more than two-thirds as the UK car market struggles with dwindling consumer confidence and margin pressures.

Uncertainty caused by stricter emissions regulations, Britain’s impending exit from the European Union and a shift towards electric and hybrid cars have led to a difficult year for the industry.

As much as £60 million was wiped from Lookers’ stock market value, which fell to £136 million as its shares tumbled. Shares of rivals Pendragon and Inchcape also fell. Pendragon said last month it expects a loss despite cutting costs.

“So much bad news is piling up at Lookers that it isn’t really a surprise to see the board want new leadership,” AJ Bell investment director Russ Mould said.

The company had anticipated in July that annual profit would be below expectations, and said on Friday that the challenges have been worse than expected since mid-September.

UK new car registrations increased by just 1.3 per cent in the important sales month of September, when demand is usually boosted by new number plates.

“It is disappointing to report this downturn in trading, but we have taken action to drive the future financial performance of the group,” White said in a statement.

In the third quarter, Lookers’ comparable sales of new cars fell 3.2 per cent compared to a 0.6 per cent slip a year ago.

Lookers underperformed in the new car segment for the first time in “many years”, Peel Hunt analyst John Stevenson said.

The company expects underlying profit before tax for the full year to be £20 million ($26 million), roughly half of what analysts were anticipating, Refinitiv data showed, and about 70 per cent lower than the result in 2018.

The Altrincham-based company is currently under scrutiny from Britain’s market watchdog about financing plans it sold between January 2016 and June 2019.

Following an earlier review of its processes, it expects to invest £10 million to improve its internal controls. It also plans to close 15 of its 165 dealerships at a cost of £8 million. – Reuters