Fiat in talks for state-backed credit line of €6.3bn 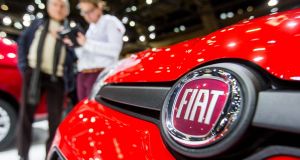 Fiat Chrysler and French peer PSA Group decided earlier this week to scrap the €1.1 billion dividends they agreed to pay as part of their merger agreement.

Fiat Chrysler Automobiles is in talks to obtain a state-backed credit line of about €6.3 billion to buttress the carmaker’s finances against the steep downturn caused by the coronavirus, according to people familiar with the matter.

Fiat’s local unit is discussing the facility with lead lender Intesa Sanpaolo SpA, the sources said, asking not to be named because the matter is private. Sace SpA, Italy’s trade-credit insurer, will provide a public guarantee for 80 per cent of the amount concerned.

The guarantee would need to be granted by a decree of the finance ministry, the people added.

Representatives for Fiat Chrysler, Intesa and Sace declined to comment.

The Italian-American carmaker is seeking to shore up liquidity after burning through $5.5 billion in the first quarter while its North American plants were shuttered and new-car demand stalled.

Fiat Chrysler and French peer PSA Group decided earlier this week to scrap the €1.1 billion dividends that each agreed to pay as part of their merger agreement, citing the negative impact of the coronavirus pandemic.

Fiat Chrysler shares were little changed at €7.17 as of 2pm in Milan on Friday after rising as much as 3.1 per cent.

Italy, hard hit by the virus outbreak, is trying to prop up its battered economy with a second stimulus package worth €55 billion.

Italy prime minister Giuseppe Conte’s government this week approved measures focused on liquidity for businesses and aid to families hurt by over two months of a nationwide lockdown. – Bloomberg

Post-Brexit red tape continues to stall deliveries 06:54
Covid to hit housing, pay to remain flat and a very Irish hybrid 06:40
Governments must plan how we will return to normal as more people are vaccinated 06:00
Professional salaries will be flat in 2021, says Morgan McKinley 05:35
Biden has promised to ‘restore the soul of America’ but what might that mean for Ireland? 05:30
Search executive
jobs on irishtimes.com