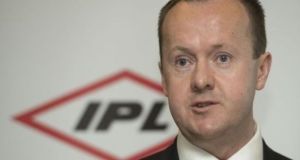 Alan Walsh, chief executive of IPL Plastics: ‘We have had to adapt’

Plastics manufacturer IPL said earnings in the first quarter rose 10 per cent to $19.1 million (€17.7 million) despite a dip in revenue.

The company said the increase was down to improved margins across its business and, despite the impact of the coronavirus shutdowns, prospects for the business were positive.

Net income for the quarter was $1.9 million, up $800,000 year-on-year. IPL also increased its net debt to $315.1 million from the previous level of $297.4 million, attributed to borrowings to fund an acquisition in the UK and for seasonal increases in working capital.

Adjusted earnings before interest, taxation, depreciation and amortisation (ebitda) margins rose to 13.5 per cent in the first quarter of 2020 from 12.2 per cent in the same period a year earlier.

The company said overall revenues for the quarter were not significantly adversely impacted by Covid-19 as the spread of the virus was only in its early stages in Europe and North America.

However, revenues for certain products had fallen during March 2020, particularly food service pails in North America.

“Like most other businesses, Covid-19 has forced IPL to face unprecedented challenges,” said chief executive Alan Walsh. “We have had to adapt, implementing a range of measures that allowed us to keep each of our 14 facilities around the world operational. The diversity of our product range, and end markets served, has acted as a natural hedge against a more significant fall-off in demand experienced by many businesses as a result of the impact of Covid-19 and associated containment measures.”

Mr Walsh said the future of the market was uncertain, but the company was well positioned to take advantage of growth opportunities.

1 In six months we will be in the grip of a 1980s-style recession
2 Angela Merkel sweeps in to save the euro zone
3 Aer Lingus wants quarantine period axed to resume flights in July
4 Google facing $5bn lawsuit for tracking in ‘private’ mode
5 Deloitte expands into cloud computing with deal for DNM
6 Unemployment rate remains at near record 26.1% in May
7 More than 2m people use website that shows lockdown distance limits
8 Should my mam wait for house prices to drop before buying?
9 Pinterest seeks new office for Dublin EMEA headquarters expansion
10 Bank of England tells banks to get ready for no-deal Brexit
Real news has value SUBSCRIBE

The fight over how to pay for the global economic recovery has begun 12:23
Cider sales fizzle out even as exports jump on Brexit stockpiling 12:08
Stock market rally holds as investors cling to recovery hopes 12:03
Unemployment rate remains at near record 26.1% in May 11:52
Bank of England tells banks to get ready for no-deal Brexit 11:11
Search executive
jobs on irishtimes.com