Euro-zone factory activity bounced back to growth in July 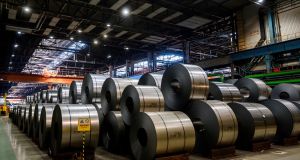 Coils of galvanized steel are stacked at steel manufacturing plant in Germany.

Manufacturing activity across the euro zone expanded for the first time since early 2019 last month as demand rebounded after more easing of the restrictions imposed to quell the spread of the new coronavirus, a survey showed on Monday.

To offer support to the ravaged economy, the European Central Bank has ramped up its stimulus measures and European Union leaders have agreed a €750 billion recovery fund.

Factories appear to be playing their part in the recovery. IHS Markit’s final manufacturing purchasing managers’ index (PMI) bounced to 51.8 in July from June’s 47.4 – its first time above the 50 mark that separates growth from contraction since January 2019.

An index measuring output which feeds into a composite PMI due on Wednesday leapt to 55.3 from 48.9, its highest since April 2018.

“Euro-zone factories reported a very positive start to the third quarter, with production growing at the fastest rate for over two years, fuelled by an encouraging surge in demand,” said Chris Williamson, chief business economist at IHS Markit.

Forward-looking indicators in the survey were generally more positive, but policymakers are likely to be concerned that factories again reduced headcount – and at one of the sharpest rates in the survey’s 23-year history. The employment index only nudged up to 42.9 from 41.3.

“The job numbers remain a major concern, however, especially as the labour market is likely to be key to determining the economy’s recovery path,” Williamson said. – Reuters