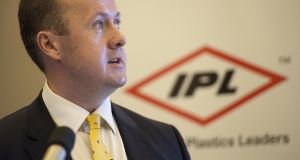 IPL Plastics chiief executive Alan Walsh: current trading in the shares shows the market is pricing in a high probability of the deal going through, with little chance of flushing out a higher offer. Photograph: Dave Meehan

Irish boardroom doyenne Rose Hynes, a non-executive director at IPL Plastics, which makes everything from ice-cream containers to wheelie bins, is holding onto a sliver of hope that there might be another wrinkle in the long and sorry tale of the company once known as One51.

IPL, whose Irish investors include farmers, dairy co-operatives and high-net-worth people like beef baron Larry Goodman and solicitor Noel Smyth, announced on Wednesday that it has agreed to be sold to Chicago-based private equity group Madison Dearborn for 10 Canadian dollars (€6.35) a share, valuing the Irish-run by Toronto-listed business’s equity at C$555 million.

While the offer price is 150 per cent higher than where the stock was trading in the middle of May, before it emerged that suitors were circling, it marks a 26 per cent discount on its initial public offering (IPO) price just two years ago.

Hynes, as chairwoman of a special committee set up to vet the Madison Dearborn bid, was right to include a provision in the agreement – known as a go-shop clause – that allows IPL Plastics to hawk itself around for another month to see if it can smoke out a better offer.

This is all the more important when the biggest shareholder, Canadian pensions group Caisse de Dépôt et Placement du Québec (CDPQ), which holds 27 per cent of the company, is rolling almost all of that – a 25 per cent stake – into the deal and only surrendering a fraction of its holding to the $10-a-share cash offer. What upside does CDPQ see in staying on board? The potential for a classic private equity play of loading a company with debt to fund special dividends?

Set up in 2005 as a spin-off from IAWS (now Aryzta, which has had its own problems and is also currently on the block), the founding chief executive of what was then One51, Philip Lynch, raised €300 million in cash and €440 million in debt over three years investing in a ragbag of companies.

When the downturn came, hundreds of millions of euro of writedowns ensued, prompting angry shareholder meetings, boardroom bust-ups and the ousting of Lynch in 2011.

Lynch’s successor, Alan Walsh, who took over as the shares were languishing at 10 euro cent on a grey market in Dublin (the equivalent of 80 Canadian cents now, when a 2018 reverse share split is factored in), was left to unravel the group’s previous collection of disparate investments – including a stake in ferries operator Irish Continental Group, Irish Pride Bakers and hazardous waste businesses.

A for-sale sign was also hoisted over One51’s non-core plastics business, before Walsh did an about-turn and decided that this was the future.

IPL Plastic’s IPO in June 2018 was meant to open up a fresh chapter. Much of the proceeds went towards a Belgian purchase last year. But the flotation was also supposed to give IPL Plastics a stock currency to be a consolidator of a fragmented market on the other side of the Atlantic.

The problem was that the shares succumbed to downward spiral soon after the stock market listing.

The reasons were numerous. Firstly, shares are tightly held by two groups – CDPQ and another Canadian firm Fonds de Solidarité (FdS) with control of more than 35 per cent on one side and the legacy Irish investors, who are understood to currently own about 25 per cent on the other – limiting the amount of tradable stock, and interest among big institutional investors.

A global war on plastics has also kept IPL Plastics firmly off the radar of money that has piled in recent years into environmental, social and governance (ESG) funds. That is despite the company pitching itself as part of the solution, with 100 per cent of its products being recyclable, its returnable agricultural crates being usable up to 45 times compared to single-use cardboard alternatives, and its wheelie bins being key to recycling.

And the underlying performance of the business hasn’t been the most inspiring. Sales, which fell 8 per cent last year in its first full year as a listed company, are set to slump by a similar rate this year amid the Covid-19 pandemic, according to consensus forecasts.

The group as good as waved a white flag on Wednesday.

“The company’s share price underperformance and the company’s limited trading liquidity make it more difficult for the company to finance and execute on accretive growth opportunities,” Hynes’s committee said.

“The special committee and the board believe that this dynamic, which has been made even more challenging given the negative impact of the Covid-19 pandemic and related uncertainties, is likely to continue.”

RBC Capital Markets analysts in Toronto suggested there is a chance that an “an over-the-top bid” of C$12 a share could emerge for IPL. But, equally, if Madison Dearborn walked away and no one else replaced it, the stock could slump to C$6.

“We believe that the likelihood of a superior offer is low given the significant premium paid by Madison Dearborn and the overall support of the board of directors, management team, and significant shareholders of the company,” RBC said.

Analysts at Canadian financial group CIBC said that the Madison Dearborn deal, valuing IPL Plastics at 9.7 times operating earnings, is “fair” and broadly in line with typical deals in the sector, which range between 8 and 11 times.

Closer to home, Noel O’Halloran, chief investment officer with KBI Global Investors in Dublin, which is a holder of the stock from its grey-market days as One51, said the surge in the share price in recent days to within a whisker of the offer price says the market is pricing in a high probability of the deal going through – with little chance of Hynes being able to flush out a higher offer.

Is this the end of the roller-coaster ride for weary Irish investors? O’Halloran thinks so.

“A unique combination of stock-specific issues surrounding IPL probably ultimately rendered its position on the public markets untenable,” he concludes.