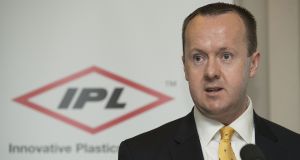 IPL chief executive Alan Walsh. The company’s Irish backers maintain that since the plastic maker floated on the Toronto market in 2018, raising €120 million, it has largely ignored their interests: Photograph: Dave Meehan

Irish shareholders will press on with complaints to regulators against plastics maker IPL but have welcomed news that Madison Dearborn is offering to buy the company for €350 million.

Backers holding about 30 per cent of the Irish-Canadian company complained to the Toronto Stock Exchange and the Canadian Securities Administrators following its annual general meeting (agm).

Solicitor and businessman Noel Smyth, who is leading the Irish shareholders, said on Wednesday that “any offer is welcome” for IPL, but added that he and his group would continue to pursue their complaints.

Mr Smyth complained to the stock exchange about IPL’s conduct of its agm last month, where he said he did not get an opportunity to raise the Irish shareholders’ concerns.

He and the other investors also want an investigation into why Canadian pension fund Caisse de dépôt et placement du Québec did not offer to pay $21 (€18.57) a share for the entire company after buying Dermot Desmond’s International Investment and Underwriting’s (IIU) 25 per cent stake in One51, which became IPL, for this price in 2017.

Mr Smyth added that the group would also continue to seek a meeting with the IPL board.

One was scheduled for this week but was postponed ahead of the announcement of Madison Dearborn’s offer.

The Chicago-based investor has agreed to buy IPL for 555 million Canadian dollars (€353 million) or $10 a share.

The price is a 69 per cent premium on the average at which the company traded on the Toronto Stock Exchange for 20 days up to July 28th.

A deal depends on approval from at least two-thirds of shareholders and IPL not securing a better offer in 30 to 40 days under a “go-shop” provision in Madison Dearborn’s terms.

Irish shareholders called last month for IPL to be sold to arrest its tumbling share price.

“We want to make sure that Madison Dearborn’s offer is the best offer or if there are other better offers out there,” Mr Smyth said on Wednesday.

He added that if the current offer is the best, then shareholders want the board to ensure that Madison Dearborn pays this once it goes through the process.

The businessman accepted that the $10 a share may be the best price that the market was willing to pay. However, he noted that it represented a loss on the flotation price and was far below the $21 paid for the IIU stake.

Madison Dearborn’s go-shop clause allows IPL to seek a better offer from interested parties. If one materialises, the US investor can match it or walk.

IPL’s board has hired BMO Capital Markets to approach potential buyers to see if they are prepared to pay more for the company.

Fitzwilliam invested €5 million in 2006 after the business had been spun out of the old food and farming supplies co-op, IAWS.

Irish backers maintain that since IPL floated on the Toronto market in 2018, raising €120 million, it has largely ignored their interests.

The company has factories in the Republic, Canada, the US, the UK, Europe and China. The group recently reported revenues in the first quarter of the year rose 10 per cent to €17.7 million.