Bottle of Roe & Co whiskey to be priced at about €35 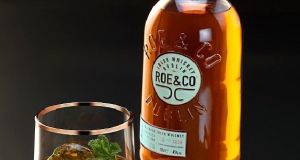 Diageo hopes to cash in on growing demand for premium Irish whiskey by investing €25 million on developing a new distillery on part of its St James Gate complex in Dublin.

The multi-national owner of Guinness plans to refit its old power plant on James Street to produce the core of what will be its new whiskey brand, Roe & Co. The whisky will retail for about €35.

Diageo will launch Roe & Co in March. The product going on sale will be a blend of quality malt and single grain whiskeys chosen from a number of distillers around Ireland.

The new distillery is due to begin operating in 2019 and will produce the malt whiskey that will form the “core” of the new spirit, according to Mr O’Brien. Diageo will blend this with grain whiskeys to make the finished product.

In the meantime it will continue to buy the whiskeys that will make up the blended product due to go on sale in March from other distillers. Diageo’s master blender, Caroline Martin, is responsible for developing Roe & Co.

“We have sourced the stock we need to keep us going until the new stock starts coming on line from our own distillery,” Mr O’Brien explained.

Diageo is naming the new brand Roe & Co in tribute to the original distillery of that name, which was also based in St James Gate, and was one of the biggest producers of whiskey in Europe in the late 19 th century.

The multi-national believes that it is meeting a growing demand identified over the last two years by its product development team, which realised that the premium category in Irish whiskey is a lot smaller than those of its Scottish and American rivals.

Tanya Clarke, general manager of reserve Europe said that Roe & Co will be sold mainly through the on-trade. Diageo is aiming at existing whiskey drinkers and hopes to attract new consumers to the category