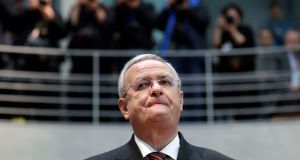 Volkswagen’s former chief executive Martin Winterkorn is being investigated for fraud by German prosecutors who widened their probe into the company’s emissions cheating to include him and 15 additional people.

This is the first time prosecutors have named Mr Winterkorn, who resigned days after the scandal became public in September 2015, in the criminal case relating to the creation, sale and concealment of the cheat software in 11 million vehicles.

Mr Winterkorn was previously named in a separate case related to when VW disclosed the affair to shareholders.

Prosecutors said on Friday that there are “sufficient” indications that the suspects in the case were aware that VW diesel vehicles had been fitted with “defeat device” software earlier than has been indicated.

VW has admitted that 11 million cars were fitted with software that reduced nitrogen oxide emissions in laboratory tests.

Earlier this month Mr Winterkorn told German politicians that he did not know what a “defeat device” was until September 2015. But he declined to answer when he first heard of emissions irregularities, which were discovered by US regulators in the spring of 2014.

Prosecutors said that fresh evidence gathered in raids on public and private offices led them to broaden their investigation from 21 individuals to 37. The prosecutors said the material would take several more weeks to examine.

According to a US criminal complaint against a lower-level VW employee unsealed earlier this month, “executive management” in Wolfsburg authorised the continued concealment of the illegal software in late July 2015.

But the US complaint did not make clear if that group included Mr Winterkorn or anyone on the management or supervisory boards.

Shareholders have sued VW to recoup billions of euro in losses, VW shares plunged more than 40 per cent after the scandal was revealed by US regulators, although they have recovered somewhat. Their lawyers have said they believe investors will have a stronger case if VW’s top management was involved.

He added: “It should not surprise us that any thorough investigation into VW would involve board members, including the CEO. The question will be whether the investigators have information we are not party to that raises further questions over the company’s account of the how the scandal unfolded.”

Arndt Ellinghorst, an analyst at Evercore ISI, said it was difficult to tell what this could mean for VW, in terms of additional fines. “If [Winterkorn] made the call [to authorise concealment] and he goes to jail, it’s not clear the situation is worse for the company,” he said.

1 Angela Merkel sweeps in to save the euro zone
2 Don’t expect a bonanza for Ireland from the EU’s €750bn recovery cash
3 Perrigo tells court of ‘very high level of unfairness’ in €1.64bn Irish tax bill
4 In six months we will be in the grip of a 1980s-style recession
5 Property price drop of up to 12% this year a ‘reasonable’ assumption – McDonagh
6 Ryanair to process all Covid-19 refunds within 10 weeks, Michael O’Leary says
7 What will it take to reopen the world to travel?
8 ECB gives ailing euro zone economy another shot of stimulus
9 Cycling made easier with an Irish-made electric bike
10 Chartered Land moves closer to approval for Dublin’s tallest tower
Real news has value SUBSCRIBE