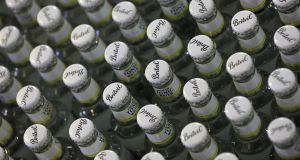 Britvic recently expanded into the US, Brazil, Spain and India with its Fruit Shoot brand. Photograph: Chris Ratcliffe/Bloomberg

Soft drinks firm Britvic said first-quarter revenue rose 4.3 per cent on strong sales of its drinks in Britain, and it reported an eighth consecutive quarter of growth in Ireland.

The company, which includes Miwadi, Ballygowan and Robinsons Fruit Shootin its product portfolio, said there was a strong start to the year for its Irish division, with revenue rising 6.4 per cent.

“Britvic has outpaced overall soft drinks market growth and has grown across all channels,” the company said in a statement.

The company said its low and zero sugar products recorded significant growth in the first quarter. “Through investment in innovation and new product development Britvic Ireland has become the number one player in “no added sugar”, with over 30 per cent share of the market,” the company said. “Nearly two-thirds of Britvic Ireland’s sales are now in the low and no sugar segment, substantially mitigating the impacts of the proposed new sugar tax.”

The company is now anticpating the closure of its deal to acquire licensed wholesaler East Coast Suppliers Limited, which was approved on January 13th by the Competition and Consumer Protection Commission. ECS will merge with Counterpoint to make the combined entity the second largest in the licensed wholesaler market.

Sales in Britain, which accounted for nearly 60 per cent of Britvic’s total revenue in the first quarter, rose 2.2 per cent to £209.8 million (€245 million) on strong demand for its carbonates like Pepsi Max, 7UP in the UK.

Sales growth in UK came from convenience and food service channels like the restaurant chain, Subway, while sales at the grocery channel remain subdued, the company said.

The Robinsons squash maker said international revenue jumped 19.8 per cent with its Fruit Shoot drink boosting sales in the US.

Britvic, which also makes and sells PepsiCo brands such as Pepsi and 7UP in the UK, operates mainly in Britain, Ireland and France, but has recently expanded into the United States, Brazil, Spain, India with its Fruit Shoot brand.

Total revenue for the first quarter rose to £351 million and volumes grew by 3.9 per cent.

1 Citigroup warns that markets are out of step with reality
2 Chris Johns: Past is another country when it comes to our post-pandemic future
3 Michael Smurfit: ‘I asked Trump to invite me to the White House for my 80th birthday’
4 ‘I’m so lucky to be in the Caribbean – a million miles from Derry Girls’
5 ‘The recovery needs to be a full-scale economic renewal’
6 Donohoe told insurers they risked ‘irreparable damage’ to reputation
7 Joint accounts: if one of us dies, can the other access the money?
8 Small businesses are cannon fodder in zealous anti-virus experiment
9 Tobacco makers still trying to make a mint from Irish menthol market
10 Brexit, coronavirus and bark beetle pose challenges for Coillte
Real news has value SUBSCRIBE

Citigroup warns that markets are out of step with reality 14:48
Donohoe told insurers they risked ‘irreparable damage’ to reputation 13:24
Chris Johns: Past is another country when it comes to our post-pandemic future 12:11
Brexit, coronavirus and bark beetle pose challenges for Coillte 30 May
Lioncor gets planning permission for ‘house of Europe’ project 30 May
Search executive
jobs on irishtimes.com