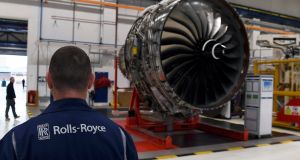 Rolls-Royce said it had undergone “a fundamental change” since the corruption was uncovered. Photograph: Paul Ellis/Reuters

The day it was whacked with a £671 million (€776.5 million) penalty for bribery and corruption – and an incalculable hit to its reputation – will not be one to celebrate in the illustrious timeline of Rolls-Royce.

Yet shares in the engine-maker, once the pride of British manufacturing, rose Tuesday in the wake of Monday’s post-market announcement that it had agreed a settlement in the long-running bribery probe.

The multimillion-pound bill for the misdeeds of its middlemen in pursuit of lucrative overseas contracts was larger than analysts had been expecting. The lion’s share – £497 million – goes to the serious fraud office (SFO), the biggest-ever British fine for corporate criminal conduct.

The United States department of justice gets $170 million, while the authorities in Brazil will collect $25 million or so.

Sportingly, the SFO has agreed an easy-payments plan for the engineering giant, allowing it to spread the cost over five years, although there will be interest on top and Rolls-Royce must cover the SFO’s costs.

The group apologised “unreservedly” in the high court on Tuesday as its settlement with the SFO was approved. It stressed that it had undergone “a fundamental change” since the corruption – some of which dates back almost three decades – was uncovered and had co-operated extensively with the SFO in its investigation.

But the scale of the bribery was staggering. In a lengthy list of offences, one individual was given a Rolls-Royce Silver Spirit car (although the luxury car marque is not part of the engineering group) and $2.25 million in return for “a favour” on a contract for Trent aero engines in Indonesia.

Employees of a Chinese airline were treated to a two-week MBA course at Columbia University plus “lavish extracurricular activities”.

Examples were also given of payments to rival bidders to submit uncompetitive tenders, and other payments were disguised as “consulting services”. Payments were also made to an employee at Gazprom, the Russian energy company.

Contracts secured as a result of the widespread corruption, which involved senior Rolls-Royce staff, accounted for profits of more than £250 million, the court heard.

The revelations are hugely damaging to the group’s reputation but, financially at least, the market’s view is that it could have been a lot worse. For example, the staggered-payments deal with the SFO means the total amount Rolls-Royce needs to stump up to all three authorities in the first year comes in at less than £300 million.

That was one of the details that cheered Rolls-Royce shareholders yesterday, as was the group’s disclosure that it had enjoyed a “good finish” to the year and that both profit and, in particular, cash are expected to be ahead of expectations.

Most of all, however, it was the end of the uncertainty that had been hanging over it for five years that cheered the market, despite the larger-than-expected penalty.

The deals reached with the three anti-corruption authorities are known as deferred-prosecution agreements (DPA), which allow companies to avoid prosecution if they admit their guilt and pay a penalty.

Companies must also agree to have their conduct monitored for a specific period after which, assuming there are no further transgressions, no legal action will be taken. DPAs were introduced in the UK in 2014 and this only the third – though by far the largest – to be struck.

Rolls-Royce said it would give further details on the impact of the settlements when it reports its annual results next month, and the group’s optimistic indications on earnings have given significant reassurance to investors. They have endured a torrid time in recent years, as has chief executive Warren East. He took over as chief executive of the group in the summer of 2015, after it had been forced to issue a number of profit warnings.

On only his second day in the job, he presided over another profit alert and has since also had to cut in a tough cost-reduction programme also aimed at eliminating the complexity and lack of clarity in the group’s structure.

East arrived at Rolls-Royce after the bribery scandal had surfaced, but he’s the one who has had to deal with the aftermath. At least when he faces the City on Valentine’s Day there’ll be no profit warning and he’ll be able to begin to draw a line under the long era of bribery and corruption.

However, individuals involved in the scandal could still be prosecuted. It may be quite some time before East can fully restore Rolls-Royce’s once-unrivalled reputation.