Daimler also under pressure in further setback for industry 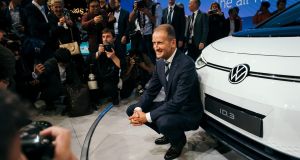 Herbert Diess, Volkswagen’s chief executive, at the Frankfurt International Motor Show earlier this month. He and Hans Dieter Pötsch; the chairman of Volkswagen’s supervisory board, and Martin Winterkorn a former chief executive, have been charged with stock market manipulation for not alerting shareholders when they learned authorities were investigating the company’s diesel emissions. Photograph: The New York Times

Volkswagen was supposed to turn the corner this year from the shadow of a costly diesel emissions scandal, with a new emphasis on electric vehicles, a new logo and a new commitment to ethical behaviour. But on Tuesday, German prosecutors charged the carmaker’s two highest-ranking executives with stock market manipulation for failing to inform shareholders of an investigation in the US that led to its conviction for emissions cheating. The allegations against Hans Dieter Pötsch, chairman of Volkswagen’s supervisory board, and Herbert Diess, chief executive, mean that the world’s largest carmaker will be led by criminal defendants as it tries to refashion itself as a climate-friendly manufacturer of affordable electric cars. The prosecutors, in Braunschweig, also charged Martin Winterkorn, a former Volkswagen chief executive.

The day brought bad news for another German carmaker, too, again tied to an emissions scandal. Daimler, the maker of Mercedes-Benz cars, agreed to pay a fine of €870 million in Germany for selling diesel cars that polluted more than allowed. The company has disclosed that it is also under investigation in the US. The legal actions were a further setback to the German car industry, the backbone of the economy, when it is struggling with declining sales and a transition to electric vehicles. At Volkswagen, Mr Pötsch and Dr Diess indicated that they would stay in their jobs, and there was no sign of any move by other members of Volkswagen’s supervisory board or its largest shareholder to oust either of them. Both men, who could be sentenced to up to five years in prison if convicted, denied the charges against them, as did Mr Winterkorn.

Mr Pötsch, who was chief financial officer of Volkswagen throughout the period when the company was installing illegal emissions cheating software in millions of vehicles, is a close confidant of the Porsche and Piëch families, which own a majority of Volkswagen’s voting shares. Volkswagen’s other major shareholder is the German state of Lower Saxony, which owns 20 per cent of the voting stock. Outside shareholders are heavily outnumbered and have little influence. A spokeswoman for Stephan Weil, the state prime minister and a member of the Volkswagen supervisory board, said through a spokeswoman that he would have no immediate comment. Dr Diess’ lawyers issued a statement in which he vowed “to carry out his duties in the company with absolute commitment.” Mr Pötsch’s lawyer, Norbert Scharf, said in a statement that his client “has nothing to blame himself for.”

Volkswagen has acknowledged that its company culture had become toxic. Under a 2017 plea agreement that resolved criminal charges in the United States, Volkswagen promised to change its ways. Overseeing the ethics drive is Hiltrud Dorothea Werner, a member of Volkswagen’s management board. She defended the accused executives on Tuesday.

“The company has meticulously investigated this matter with the help of internal and external legal experts for almost four years,” Ms Werner said in a statement. “The result is clear: The allegations are groundless.” But the case could also have financial consequences for Volkswagen. Shareholders have sued, seeking damages that could reach $10 billion (€9 billion). At issue is when the Volkswagen executives learned that the company was under investigation in the US for deploying software that produced artificially low emissions in diesel cars when they were being tested. German law requires senior managers to warn shareholders of events that could affect the stock price.

Prosecutors said on Tuesday that Mr Winterkorn had known no later than May 2015 that the company could face serious penalties in the United States. Mr Pötsch was informed at the end of June 2015 and Dr Diess at the end of that July, prosecutors said. The three defendants withheld information from shareholders in order to protect the Volkswagen share price, prosecutors said. Volkswagen shareholders did not learn of the cheating until the Environmental Protection Agency issued a notice of violation in September 2015. Volkswagen’s share price fell by almost half, and the cost of the scandal has since topped $30 billion in court settlements and fines.

The allegations are a particular blow to Dr Diess, a former BMW executive who arrived only months before the EPA publicly accused Volkswagen of cheating. He has been trying to restore Volkswagen’s image by changing the authoritarian, win-at-all-costs company culture that helped foster the scandal. This month, he presided over the flashy introduction at the Frankfurt International Motor Show of a battery-powered hatchback, the ID.3. Volkswagen has staked its future on what it says will be a family of moderately priced electric vehicles, making emission-free transportation accessible to middle-class buyers. Volkswagen also introduced a cleaner logo.

“Neither the facts nor the law justify the charges,” lawyers for Dr Diess said in a statement. “Newly arrived in July 2015, Dr Diess was not in any position to foresee the magnitude of the economic consequences actually resulting from the diesel emissions fraud.”

Dr Diess received moral support on Tuesday from Elon Musk, chief executive of Tesla. “Herbert Diess is doing more than any big carmaker to go electric,” Musk wrote on Twitter. “The good of the world should come first. For what it’s worth, he has my support.”

The charges also put pressure on Mr Pötsch, who was chief financial officer when the scandal came to light in 2015 and was responsible for communicating with shareholders. As supervisory board chairman, he oversees senior management and presides over the annual shareholders meeting.

“The indictment against Mr Pötsch is unfounded,” his lawyer said in a statement. “In the summer of 2015, no obligation to inform the capital market arose at any time even from a purely capital market law perspective.”

Mr Winterkorn’s lawyer, Felix Dörr, said in a statement that the former chief executive had trusted assurances from Volkswagen employees that excess emissions in diesel cars were the result of a technical problem, which could be worked out with regulators in the United States. Volkswagen later admitted that it had programmed the vehicles to recognize when an emissions test was underway and to crank up pollution controls so the cars were deemed compliant. On the road, the cars polluted far more than allowed. Mr Winterkorn “had no prior knowledge of the intentional use of forbidden motor management software in diesel passengers cars in the US,” the statement said.

Mr Winterkorn, who resigned days after the scandal burst into public view, already faces fraud charges in connection with the emissions cheating, which he has denied. – New York Times service

Norwegian Air plans to cut fleet by more than half as part of rescue 17:50
Putin warns of ‘all against all’ fight if global development is neglected 17:22
Hauliers going to France will need negative Covid-19 test from Thursday 17:00
British factories should make up AstraZeneca vaccine supply, EU says, as row deepens 15:49
Goldman Sachs loses legal fight against EU cartel fine 15:49
Search executive
jobs on irishtimes.com