Bombardier to be supplied by Morocco plant after sale, minister says 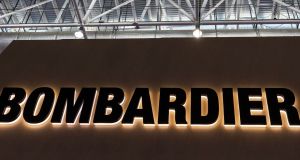 Canada’s Bombardier will sell its wing component plant in Morocco to a manufacturer that will continue to supply Bombardier after a sale, Moroccan Industry Minister Moulay Hafid Elalamy said on Monday.

The plane-and-train maker said last week it would unite its corporate and regional jet units into one aviation division as part of a shake-up. It plans to sell plants in Belfast and Casablanca.

“The successful bidder will be revealed in three weeks,” Mr Elalamy said two weeks after a visit to Canada during which he met Bombardier officials.

Bombardier spokesman Olivier Marcil said by phone late on Monday that the plant would remain a supplier for the company for the foreseeable future.

1 Will your boss let you work long-term from home – or from abroad?
2 Plans for €2bn Dart expansion lure Bombardier to Dublin
3 Wexford Solar bought by energy giant EDF in deal to build eight solar farms
4 AA Ireland bought by Olivier Sarkozy-led fund for more than €240m
5 Only half the homes needed this year will be built, construction event told
6 Google tells workers to return to country where they are employed
7 McGuinness faces Brexit and Covid grilling at parliamentary hearing
8 Virgin Media unveils new entertainment platform
9 Ryanair signals possible closure of Cork and Shannon airport bases
10 City firms move £1.2tn and 7,500 jobs out of London - EY
Real news has value SUBSCRIBE