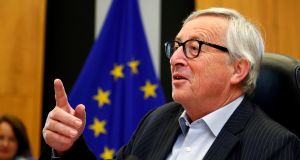 When Jean Claude Juncker first mentioned a summit in Sibiu, Romania, back in his state-of-the-union address in 2017, he set a high, ambitious bar for this week’s meeting.

This, the European Commission president suggested, would be the opportunity for Europe’s leaders to respond in confident, ringing terms to Brexit, to show European voters in the May 23rd elections that the European Union has a vision and a vital future, that it remains the answer to the great challenges the continent faces. That Britain’s departure will not stall the integration engine that drives it. On the contrary...

“The duty of every generation is to change the destinies of Europeans for the better. To make good on our enduring promise of peace, progress and prosperity. This has been my vocation and my life’s work,” he reiterates in the commission’s submission to Sibiu, a stirring account of the commission’s last five years’ work and of the EU’s resilience.

In effect Sibiu’s message would be the legacy project for Juncker, a fitting farewell for the president who departs at the end of October (with the UK, if the current timeframe holds).

Sibiu would have happened after Brexit, but the best laid plans of mice and men have gone awry, postponing the event and turning the scheduled “first summit of the new era” into a less era-defining, more uncertain halting point on the road.

The political climate has changed too. Although France’s President Emmanuel Macron remains unwaveringly ahead of the pack, committed to an ambitious integration programme, the period has seen a strengthening of voices like those in Hungary and Poland, notably in Italy, which urge the union to hasten slowly. How will the promotion by EU leaders of the idea of accelerating integration play in elections likely to be dominated by populist anti-EU rhetoric? Not well, many fear.

And so the draft declaration for Thursday’s meeting, embracing the politics of the lowest common denominator, eschews specifics for warm-sounding, motherhood-and-apple pie platitudes.

“There is no place for divisions that work against our collective interests. We will stay united, through thick and thin. We will show each other solidarity in times of need and we will always stand together. We can and we will speak with one voice,” the text declares.

Brexit is not mentioned in the draft, nor will British prime minister Theresa May be present, but that strong message of unity London will understand as an unmistakable signal that the EU remains in no mood to budge from its commitment to the withdrawal agreement in its entirety.

Of course, this is not a proper summit in the legal sense. Only an informal meeting of 27 leaders. So no formal “conclusions”, but a presidency statement from the Romanians summing up the spirit of the meeting in a way that will offend no one.

A “non-paper” from European Council president Donald Tusk also sets out the outlines of the EU’s strategic priorities in a similar vein – they will be filled out at the normal June summit when leaders are also expected to nominate a clutch of presidents for its main institutions, including the European Council, commission and European Central Bank. Preliminary informal discussions on nominations will certainly begin in the margins of in Sibiu.

In the hope of moving the discussion on to specifics the Dutch have also submitted five more blunt reflection papers on aspects of the way the EU does its business and which emphasise the need to strengthen exisiting co-ordination mechanisms rather than inventing new ones. Reflecting the country’s emerging role as the key alternative voice to the Franco-German alliance, Taoiseach Leo Varadkar drops off on Wednesday to confer with Mark Rutte on his way to Sibiu.

On migration the Dutch paper pulls no punches on the requirements of mutual solidarity with those member states who will not share the burden of accommodating asylum seekers. Hungary and the Visegrad countries are not mentioned specifically, but the target is clear: “Free-riding needs to end,” the paper says. “A lack of implementation of the current and future acquis should lead to negative consequences: financially and/or in enjoying privileges resulting from Schengen.” The Romanian declaration simply refers to the need to reform the asylum system.

On foreign policy co-ordination the Dutch echo a long-standing Juncker demand for ending unanimity voting on sanctions to allow the union rapidly to be able to use its economic clout in international diplomacy without being hamstrung by a few member states who might be wary of tackling potential targets such as Russia.