Unions may ask that Bombardier be nationalised 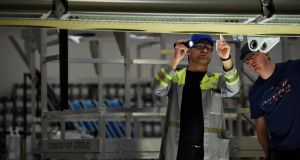 The UK government should examine the possibility of nationalising Bombardier in Northern Ireland to protect thousands of jobs which are at risk, union leaders have said.

The decision to sell off the entire business in the North by Bombardier’s Canadian parent could attract “vulture companies” who might spin off various parts of the business to the highest bidder, according to the unions. They fear this would jeopardise the future of its 3,600 core workforce and thousands of supply chain jobs.

Bombardier Aerospace is the largest manufacturing company in the North and one of the largest private sector employers. It is estimated that 300 local firms are direct suppliers to the business.

Unite regional co-ordinator Susan Fitzgerald, who has responsibility for the Bombardier workforce, said the union’s priorities are to retain jobs and secure investment in a sale process.

“There is a lot of uncertainty and turmoil at the moment and, for Bombardier workers, the one overriding emotion about the sale is fear. We would like to see some certainty as soon as possible about what the future is going to look like for Bombardier workers and, if it comes to it, we will ask the UK government to renationalise Bombardier to protect jobs in Belfast, ” said Ms Fitzgerald.

DUP leader Arlene Foster has said Bombardier is an “integral part of the Northern Ireland economy”. And she has stressed the company can be “assured of any support locally or in London which might assist them at this time”.

Bombardier’s east Belfast location has traditionally been a DUP stronghold and the future of Bombardier would be high on the party agenda. But whether London would have the political will or financial resources to renationalise is another matter.

The government nationalised Short Brothers in 1943 and it remained in public ownership until sold to Bombardier for £30 million in 1989. At the time, Bombardier was given grants of £79 million for capital investment and £18 million for other costs, chiefly training. London also wrote off a £390 million loan that had been advanced to Shorts to repay commercial debts for past losses.

Then secretary of state for Northern Ireland Tom King said the government had also agreed to give Bombardier £275 million to “recapitalise the company, to repay the remaining borrowings and to meet anticipated losses on existing contracts”.

Bombardier has continued to receive significant financial support from the UK for its Northern Ireland operations.

Since Invest NI, the economic development agency, was established in 2002 it has paid out grants totalling £75.5 million to the company.

The UK also offered a £180 million package of investment in 2005 to support the £520 million investment to base production of the C-Series (now A220) wings in Northern Ireland.

According to a spokeswoman for Bombardier, it has invested more than £2.7 billion in the North, including financial support in the form of government grants.