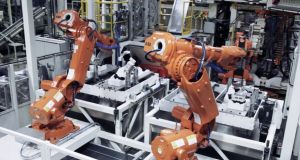 A family-owned plastics business in Co Westmeath that makes components for Tesla and other car makers, has secured a multimillion euro investment that will enable them to expand further into China.

British private equity firm Elysian Capital has taken a majority stake in Castlepollard-headquartered Mergon Group, with the Beirne family retaining a significant stake in the business and managing director Pat Beirne staying on to run the business.

No financial details of the transaction have been disclosed but industry sources described it as a “significant” deal. Founded in 2007, Elysian typically acquires majority stakes in businesses valued at between £20 million and £100 million.

Established in 1981, Mergon makes plastic moulding products used by car manufacturers, healthcare companies and other businesses. Customers include BMW, Jaguar Landrover, Abbot, Medtronic, Xerox, Whirlpool and Tesla, for whom it makes windscreen and camera-washer systems for its electric cars.

Mergon employs 660 people globally, almost half of whom are in Castlepollard. It also has facilities in South Carolina in the United States, and in the Czech Republic.

“We are delighted to announce this deal, which will provide Mergon with the funds and expertise to continue to grow the business and expand into new markets, in particular in China, where we see huge opportunities,” said Mr Beirne.

He added that the company is targeting growth of 50 per cent over the next three years.

Elysian Capital made a killing earlier this month after Pebble Group, a company in which it has a stake, raised £135 million in a flotation on the AIM in London. It made a return of 4.3 times its investment in the company, of which it retains a 13.9 per cent shareholding.

The firm is reportedly raising a third buyout fund that is expected to be similar in size to its predecessor, which closed at £250 million in 2015.

Elysian was founded in 2007 by Ken Terry and Chai Patel. They met when Mr Terry backed Mr Patel in a management buyout of the Priory Group, while a partner at Doughty Hanson.

“The management team at Mergon has created an impressive business servicing the automotive, industrial and healthcare sectors. They have successfully identified and delivered on opportunities in their chosen markets worldwide and we are very proud and excited to be able to support them on the next phase of their journey,” said Mr Terry, Elysian’s chief executive.

1 How can I view my dead brother’s will if I’m not the executor?
2 Michel Barnier rejects UK’s call for Canada-style trade deal
3 Applications for 961 new homes in Dublin and Meath rejected
4 Aqua Dome in Tralee could close over insurance claims, directors warn
5 Facebook faces tax court trial in US over Irish offshore deal
6 Barry’s Hotel at €8m comes with potential to double in size
7 Travel costs for IDA chief topped €45,137 last year
8 Job numbers hit a record 2.36m as hi-techs lead the way
9 Germany drops opposition to fiscal boost in event of downturns
10 Bursting of Tesla bubble a case of ‘not if, but when’
Real news has value SUBSCRIBE