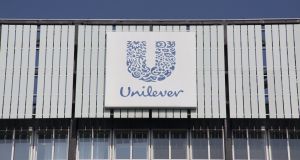 Unilever expects sales growth in 2019 to be slightly below its prior expectations.

Unilever will miss its underlying sales target this year, the consumer goods giant warned yesterday, sending shares in the maker of Dove soap and Ben & Jerry’s ice cream into their steepest fall in six months.

In an unscheduled trading update, Anglo-Dutch Unilever also struck a downbeat tone on its prospects for meeting its midterm target for sales growth of 3-5 per cent next year.

“Looking ahead to 2020, growth will be second-half weighted. While we expect improvement in first half of 2020 versus this quarter, we expect that first-half growth will be below 3 per cent,” chief executive Alan Jope said in a statement.

“Our full-year underlying sales growth is expected to be in the lower half of the multi-year range,” added Mr Jope, who took on the top job earlier this year.

Unilever has targeted annual growth of 3-5 per cent since Mr Jope’s predecessor, Paul Polman, fended off a takeover bid from Kraft Heinz in 2017.

Reaching them has got tougher as Unilever struggles to keep up with shoppers shifting from mass-market brands to niche products and retailers’ private labels. Some of its rivals are pulling ahead. While Unilever has bought the likes of Tatcha creams and Graze snacks while selling its margarine business, Nestlé has moved aggressively to shed slower-growing operations under chief executive Mark Schneider.

Earnings, margins and cash are not expected to be impacted by the slower sales growth, the company said.

Developed economies have been a drag for Unilever for several quarters, where growing numbers of consumers are turning to fresher foods, niche brands or cutting back on spending.

Much of this was caused by a sharp slowdown in consumption in rural India, where growth for the first time is underperforming urban markets, Mr Jope said.

India is Unilever’s second-biggest market after the US, contributing nearly 10 per cent of its group revenue.

“When India takes a slowdown, we definitely feel it . . . but this is more turbulent than normal,” Mr Jope said, adding that he expects the market to recover in the second half of 2020. – Reuters

1 Should I switch bank now with Ulster Bank at risk of closing?
2 Tick all the right boxes when it comes to your house insurance
3 Aldi and Lidl at back of queue during UK pandemic
4 Belfast mailbox address used by account holder in Russian money-laundering scheme
5 Will brother’s widow get half of our parents’ estate when they die?
6 EU watchdog calls for end to Covid loan payment breaks
7 ‘I have three children and a dog, so I feel like a bit of a human ATM’
8 Isme to support legal action against pension tax relief limit
9 Finance Ireland refinances mortgages with low level of payment breaks
10 FinCEN Files: Dublin business features in leak of US treasury documents
Real news has value SUBSCRIBE