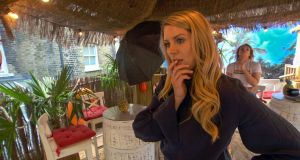 Pamela Laird during a task on BBC’s the Apprentice programme. The Irish businesswoman is seeking an investor to help grow her beauty business. Photograph: BBC/Boundless

Irish businesswoman Pamela Laird, who appeared on BBC’s the Apprentice, is seeking an investor to help grow her beauty business to have about €3 million in turnover by 2024.

Having got to the final three in the Apprentice, Ms Laird was ultimately “fired” by Alan Sugar but is now gearing up to sell new products devised by her company into large retailers.

Ms Laird’s company, Moxi Loves, will next year launch its range into Boots and Primark in the UK.

“There’s no doubt that those orders are substantial, but supporting the market is a big cost,” she told The Irish Times, adding that securing an investor would help with cash flow and allow the business expand “at the rate I’d like”.

Dunnes Stores and SuperValu are also due to stock some of her products.

While she has 10 future products in her business plan ready to be launched, her company’s current resources force her to leave about six months between each launch. In the beauty business, she said, “you need to be launching every two to three months”.

It started life with two other products, which were ultimately discontinued as a result of EU legislation governing cotton buds and wipes. While the legislation has yet to fully take effect, the company moved to change its focus almost immediately towards sustainable materials for its products.

Its makeup removal pads don’t have microplastics, for example, and biodegrade in six months compared to 100 years for baby wipes. Its dry shampoo sheets are made using blotting paper and rice powder to absorb excess oil, where traditional dry shampoo is put into an aerosol can.

Asked whether she still needs an investor, Ms Laird said: “Yes, I do. What’s clear to me now is I need a business partner.” On the Apprentice, she was offering a 50 per cent stake for an investment of €250,000 and, speaking to The Irish Times, she confirmed that position as a “good starting point”.

With that cash injection, Ms Laird said the aim would be to grow to about €3 million in turnover by 2024. The company is also looking to break into the United States.