Amid Irish Rail coffe cup controversy, Zeus says its recycling boxes for cups are to be installed in 80 O’Briens and Bagel Factory outlets from January 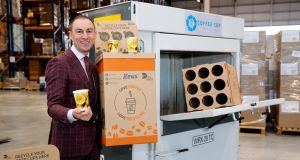 Irish packaging company Zeus has agreed to roll out a recycling scheme for coffee cups across 80 O’Briens and Bagel Factory outlets from January 2020.

The company said its recycling scheme is the first in the Republic. Under the scheme, cafes, offices or other businesses will have a coffee cup collection box, which can hold 700 used coffee cups. Consumers can recycle their cup in these boxes but the business which has the box will have to pay 7c per cup, or €49 per box.

Whether the scheme will be successful will be down to consumer habits, although at present, recycling of single use cups appears unlikely to take place in the establishment that sells those cups in the first place.

Nevertheless, Zeus is promoting this scheme as an alternative to the Government’s move to introduce a 25c coffee cup levy from 2021 which they say doesn’t address the disposal of recyclable and compostable coffee cups.

“Proposals such as the recently-announced government plans for a latte levy also don’t resolve this issue,” said Zeus owner Brian O’Sullivan, who noted that the infrastructure to recycle cups doesn’t exist.

At present, large volume of the 200 million single-use cups sold in Ireland are sent to landfill due to not being properly recycled or being dealt with by waste collectors that have the proper infrastructure to deal with the cups.

Zeus, which itself sells compostable cups for almost 9c a cup, has partnered with recycling group DS Smith which can recycle polyethylene-lined cups and polylactic acid-lined cups. Under the deal, Zeus collects the boxes and ships them to DS Smith in the UK.

Providence to raise $3m as deal over key asset progresses 07:28
Tesla engineers show ventilator prototype on YouTube 06:46
Construction delays ahead, legal issues with pay cuts and some Covid perspective 06:30
Major building projects could be delayed two years after Covid crisis 05:30
What does the ECB’s doing ‘everything necessary’ policy mean for you? 05:12
Search executive
jobs on irishtimes.com