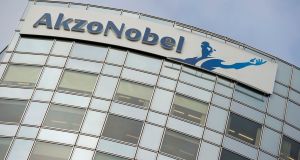 Dutch paints and coatings maker Akzo Nobel rejected a €21 billion bid from larger US rival PPG Industries on Thursday, saying instead it wanted to “unlock value” by spinning off its chemicals business.

PPG’s unsolicited offer comes just days before an election where the vulnerability of the biggest Dutch companies to foreign takeover has been an issue.

Underlining such concerns, the country’s economic affairs minister Henk Kamp said the proposed deal was “not in the interest of the Netherlands”.

Akzo chief executive Ton Buechner said the maker of Dulux paint was best placed to create value itself and was looking at floating or selling its specialty chemicals arm, which accounts for roughly a third of sales and earnings, with a 2016 operating profit of €629 million on sales of €4.8 billion.

The cash and share offer from PPG was “unsolicited, non-binding and conditional” and worth around €83 per share, Akzo said. The bid represented a 29 per cent premium to Akzo’s closing price of €64.42 on Wednesday and its shares jumped almost 15 per cent to €73.95 on Thursday, nearing all-time highs.

Pittsburgh-based PPG confirmed its approach on Thursday, saying its proposal was “attractive and comprehensive”. – Reuters

1 Stripe lures Dhivya Suryadevara from General Motors to be CFO
2 Revolut losses tripled before Covid-19, despite rise in users
3 ‘No demand... because there are no people’ at well-known Dublin pub
4 Revised help-to-buy scheme for first-time buyers open for applications
5 Transferring the family farm without a tax headache
6 Divorce: What will it cost and can you afford it?
7 Nearly 30,000 could lose pandemic payment if they do not confirm eligibility
8 Post-Covid television starts to shape up – but with missing pieces
9 HSE says fix for Covid Tracker app rolled out to all Android users
10 CityJet exits examinership after High Court ruling
Real news has value SUBSCRIBE