Paul Coulson’s Ardagh stake worth up to €1.48 billion as IPO nears

Financier has driven acquisitive growth since making initial investment in 1998 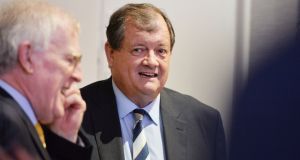 Ardagh chairman Paul Coulson’s stake in the group is understood to be about 36 per cent. Photograph: Alan Betson

Ardagh Group chairman Paul Coulson’s stake in the glass and metal containers giant he has built by acquisition in less than two decades is worth as much as €1.57 billion (€1.48 billion), based on the initial pricing range of the group’s initial public offering (IPO).

This would place the Dublin financier comfortably in the top spot in terms of an Irish executive’s personal stake in a publicly-quoted company – well over double the €705 million value of Michael O’Leary’s 4.1 per cent stake in Ryanair.

Ardagh will have an initial market capitalisation of $4.69 billion, based on figures published late on Friday with the US Securities and Exchange Commission in relation to the company’s planned New York Stock Exchange flotation this month.

The documents signalled Ardagh plans to raise as much as $324 million through the issuance of 16.2 million shares in its forthcoming IPO, equating to a 6.9 per cent stake in the group. Banks managing the deal will have the authority to sell a further 2.43 million shares in a follow-up offering, if demand for stock was high.

Mr Coulson (64) has turned Ardagh, which traces its routes to the Irish Glass Bottle Company that was set up in Dublin in 1932, into one of the world’s largest glass bottle and metal containers makers since he first invested in the company in 1998 and took over as executive chairman. Since then, sales have grown from €51 million to €7.64 billion, while earnings before interest, tax, deprecation and amortisation (ebitda) have ballooned from €10 million to €1.33 billion last year.

The chairman started on his international expansion in 1999 when the group acquired UK glass packaging company Rockware for £247 million (€285 million), culminating last year in the $3.4 billion purchase of a beverage cans business from US rival Ball Corp and the UK’s Rexam.

The acquisitions drive throughout has been driven by the issuance of high-yielding corporate bonds. The group’s net debt stood at €7.2 billion at the end of December. It has about 23,500 employees globally.

Mr Coulson’s own stake in the group is understood to be about 36 per cent. That’s through a direct 25 per cent stake in Ardagh’s ultimate holding company and his interest in a company called Yeoman Capital, which owns a further 34 per cent of the packaging group.

The businessman has been planning a flotation of the group since 2011, having taken the then-much-smaller company private in 2003.