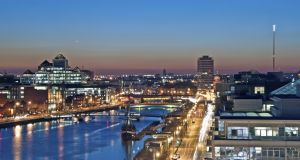 Dublin could be the base for the parent of a €60 billion merger between US and German gas companies Praxair and Linde. Photograph: Getty

German industrial gas giant Linde and US rival Praxair, which are on the cusp of merging to create a group with a combined €60 billion market value, are reportedly poised to base the business’s parent company in Dublin.

German financial newspaper Handelsblatt reported on Wednesday that Dublin is set to pip London and Amsterdam to host the headquarters of the combined group’s holding company. London is said to have fallen out of favour because of the uncertainty surrounding Brexit, while Dutch regulations are viewed as too “burdensome”, according the report.

Considerations around top executives of the merged group are also seen as playing into the decision-making process. Stephen Angel, head of Connecticut-based Praxair, would be looking at a six-hour flight to Dublin from the US, shorter than London or Amsterdam.

Ireland’s 12.5 per cent tax rate has been discounted as a factor, according to Handelsblatt, which cited sources on both sides of the Atlantic.

Munich will remain the operational headquarters for the group, while Dublin will have only about a dozen staff, it said.

The imminent merger of the two groups, following a two-year courtship, will create the industrial gas sector’s biggest global player. Such companies provide gas mixtures, including nitrogen, helium and pure oxygen, in cylinders for use in a variety of industries, including the oil and gas, chemical, steelmaking and pharmaceutical sectors.

A spokesman for Linde declined to comment when contacted by The Irish Times.