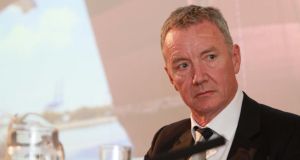 Tullow Oil’s incoming chief executive, Paul McDade, will start off next month on an 18 per cent lower salary and significantly reduced bonus plan compared with his predecessor, Aidan Heavey.

Mr McDade’s compensation for the year came to £1.6 million as chief operating officer, according to the group’s annual report, published on Wednesday. While his base salary as chief executive will be £725,000, which represents a 44 per cent hike from his previous position, it is down substantially from that enjoyed by Mr Heavey.

In addition, the group has also decided this year to cut the maximum annual share and cash bonus of executive directors to 400 per cent of base salary from 600 per cent previously. The chairman’s fee will fall to £280,000 from £310,000 as Mr Heavey takes up this position for a period of up to two years after stepping down as chief executive.

Remuneration committee chairman Jeremy Wilson said: “The committee believes that these proposals will better align the interests of management and shareholders, incentivise, motivate and retain our valued executive directors and help us move forward in what promises to be an exciting and challenging time for the industry.”

The changeover follows an eventful nine months for Tullow, which saw its Ten project off Ghana begin to pump oil, while it sold most of its stake in a Ugandan oil project to French group Total for $900 million. While most of the accord is comprised of deferred payments, it eases the Irish company’s capital expenditure demands and leaves it with a remaining stake of 11.8 per cent.

Looking ahead, Tullow said in the annual report that its exploration activities are picking up this year as it takes advantage of a slump in drilling costs in recent years.

“2016 therefore marks the end of one exciting era, and the beginning of another,” said outgoing chairman Simon Thompson in the annual report.

1 Companies without tax clearance shut out of Covid wage subsidy
2 Avoca warns of redundancies due to coronavirus
3 Coronavirus: We must save lives but we also need to live
4 Over 400 complaints from migrant workers at meat plants lodged with WRC
5 McGann stepping down at troubled Aryzta
6 Errant texts highlight weaknesses in banks’ digital shift
7 Virgin Media vows to withhold sports channels until Eir ‘pays its bill’
8 Revised help-to-buy scheme opens for applications
9 Staff at Dublin and Cork airports to vote on work practice changes
10 Coronavirus spreads to sandwich king
Real news has value SUBSCRIBE