It may be agm season, but it’s lockdown time 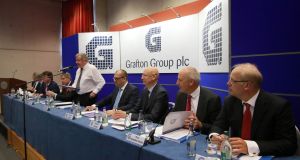 It’s agm season again for Irish public companies but not as we know it, thanks to the impact of the Covid-19 pandemic.

In normal times, these meetings offer retail investors an opportunity to receive an update from executives about a company’s trading and future strategy. For the most part, they are dull affairs but for those of a certain age, they offer a little outing, oftentimes with the added benefit of some finger food and refreshments afterwards, and a natter with fellow shareholders.

However, the recent lockdown on the economy to prevent the spread of the virus meant that companies had to scrap their plans for a traditional public meeting.

Among them was builders’ merchanting and DIY chain Grafton Group, which axed its public meeting, offering instead the option for shareholders to dial in to listen to the deliberations of certain board members who were meeting behind closed doors.

This drew the ire of its founder and former chief executive and chairman, Michael Chadwick, the man who essentially built Grafton into the successful company that it is today.

Chadwick, who still owns more than 9 per cent of the business, was so ticked off that he went to the considerable expense of challenging it in the High Court on the grounds that it unlawfully breached shareholders’ rights.

On Tuesday, his senior counsel, Declan McGrath, told the court that the format of the meeting, to be conducted by four “company insiders”, was “a bit Stalinesque” and a “parody” of the rights of members of companies. Strong language.

There was “no reason” to hold the agm in the middle of a pandemic when the company could lawfully hold it on any date up to August 7th, he added.

Paul Sreenan, senior counsel for Grafton, argued that the meeting had to be held on its original date in accordance with a March notice issued by the company. In the end, the judge sided with Grafton on the balance of convenience.

The court case turned out to be more dramatic and entertaining than any Grafton agm ever was. It also put Grafton, and others, on notice that they shouldn’t take their shareholders for granted.