The true carbon cost of feeding the data centre monster 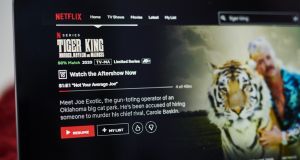 Depending on which group of experts you refer to for your calculations, 30 minutes of Netflix amounts to driving between .5 and 4 miles in terms of CO2 emissions. Photograph: Gabby Jones/Bloomberg 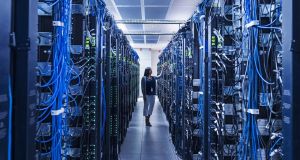 Physical buildings filled with row upon row of servers in air-conditioned rooms make streaming possible and Ireland is home to 55 of these data centres. Photograph: Erik Isakson/Getty Images

If someone told me a month ago that the name on everybody’s lips is going to be Joe Exotic, I would have been understandably confused. But it’s true: the latest figures from Nielsen show that the first seven episodes of Netflix’s Tiger King have totalled more than 5.3 billion streaming minutes worldwide.

And this number will keep rising because in the time of corona, we stay at home and we stream. Isn’t this the virtuous thing to do? It depends upon whether you are more worried about flattening the curve or lessening your carbon footprint. Depending on which group of experts you refer to for your calculations, 30 minutes of Netflix amounts to driving between .5 and 4 miles in terms of CO2 emissions.

The former, more conservative estimate uses figures from a 2014 peer-reviewed study and may be more accurate than the latter, which was in a 2019 report by Paris-based think tank The Shift Project. A recent analysis by the International Energy Agency claims errors in The Shift Report’s figures mean carbon emissions as a result of viewing Netflix were overestimated by 30 to 60 times. So, those five billion streaming minutes of Joe Exotic translates to the production of - at the generous end of the scale - an estimated 33.3k tonnes of carbon dioxide.

And that’s not even taking into account all the other cloud storage and audio and video streaming that have become part of everyday life.

Lest you lie awake at night fretting over whether we, as a species, are streaming our way to environmental destruction, it is worth noting that this is currently being offset by lack of travel. Think of all the actual miles you are not clocking up on the road or in the air while Zooming with your colleagues in smart-casual work gear (ironed blouse/shirt up top, trackies below). Satellites from the European Space Agency (ESA) reveal a sharp drop in carbon emissions - the air is cleaner than it has been in a long while.

However, life streams on and CO2 emissions are one result of the energy outputs of a combination of the devices we use, the networks they connect to and the data centres housing and serving up Netflix so we can chill. It feels like everything simply sits in “the cloud” but physical buildings filled with row upon row of servers in air-conditioned rooms make streaming possible and Ireland is home to 55 of these data centres.

What does this mean for the nation’s energy consumption and carbon footprint? In a March 2020 report from Host in Ireland, Dave McAuley, founder and CEO of BitPower, said in the foreword that Ireland’s total annual electricity use for 2019 was about 28 TWh (terawatt hours) and data centre energy demand was an estimated 10 per cent of this.

With an additional 44 new data centres currently under construction or with approved planning and five more going through the application process, this number will most likely rise. EirGrid calculates that, by 2028, data centres will be consuming 29 per cent of Ireland’s electricity.

Ian Lumley, Built Environment and Heritage Officer for An Taisce, says: “Bord Pleanála hasn’t woken up yet to the implications [of these figures] because it keeps on rubber stamping new applications”.

“How Bord Pleanála treats these is they give permission for a data centre building and they don’t attach any conditions as to the energy source,” he claims.

“If you look at the environmental impact statement undertaken by John Spain Associates for a new Amazon data centre development near Swords, the only climate impact addressed is the truck movements for the construction phase.

“They’re not addressing the climate impact of the energy used. What’s happening is the energy is not being properly considered at any stage, either in the planning application for the installation itself or the consent for the grid connection. It’s just fudged,” claims Lumley.

In terms of energy efficiency, the US Environmental Protection Agency reports that the average American data centre has a PUE of 2.0. This is the power usage effectiveness, or the ratio of total power entering a data centre divided by the power used by all of its IT equipment.

Google claims its data centres are far more energy efficient than this: “we report a comprehensive trailing 12-month (TTM) PUE of 1.11 across all our large-scale data centres (once they reach stable operations), in all seasons, including all sources of overhead.”

Amazon points out that a company using their cloud services in favour of running their own servers will be far more energy efficient because these data centres are designed to run more cost-effectively: “A typical large-scale cloud provider achieves approximately 65 per cent server utilisation rates versus 15 per cent on-premises, which means when companies move to the cloud, they typically provision fewer than a quarter of the servers than they would on-premises”.

Therefore AWS (Amazon Web Services) customers, they claim, only need 16 per cent of the power that they would for running on-premises infrastructure.

How do these data centres become more energy efficient?

Artificial intelligence and machine learning are being touted as the solution. For example, Google’s acquisition of AI company DeepMind led to the development of a computer model that reduced energy used for cooling Google data centres by 40 per cent in 2016.

But at what initial cost? Researchers at the University of Massachusetts Amherst in the US recently carried out a study to gauge the energy consumption required to train some common AI models. They found that the training process can emit over 626k tonnes of carbon dioxide, which they say is nearly five times the lifetime emissions of the average car, or the equivalent of about 300 round-trip flights between New York and San Francisco.

Carbon offsetting is another green strategy employed by most industries. This ranges from planting trees to building wind farms. For example, a Microsoft project taking place through 2017 and 2018 saw the planting of trees across 137 hectares of land in Ireland. And Amazon has invested in wind farms in Cork and Donegal.

Microsoft promises that by 2030, it will be carbon negative and by 2050 it will have removed all the carbon the company has ever emitted, directly or by electrical consumption, since it was founded in 1975. Meanwhile, Amazon has pledged that 50 per cent of all will be carbon zero shipments by 2030.

But back to the 55 data centres here in Ireland. They exist in the context of an SEAI (Sustainable Energy Authority of Ireland) report saying that 33.2 per cent of electricity generated in Ireland in 2019 came from renewable sources. This is good news, surely?

Lumley says: “If you increase the energy demand with more data centres, you’re actually diluting the end benefit of that renewable energy penetration we’re creating. Every time you add say, another hundred megawatts to the system, only half of that is going to come from renewable sources and the other half is going to come from fossil sources.

“Any new data centre should provide a new, directly linked supply of renewable energy; it shouldn’t be diluting our existing national targets,” he says.

“Companies will say ‘we’re going to be buying renewable energy’. It’s a bit of greenwashing, really. The fact is you’re getting the mix of energy that’s coming into the electricity grid from all the sources.”

Right now, renewable energy produced in Ireland mostly comes from wind with some growth in solar but Lumley points out that more attention should be paid to geothermal reserves.

“For example, there used to be a spa in Lucan with geothermal capacity. This form of renewable energy has been considered in other countries for powering data centres and An Taisce would like to see its being properly assessed as an option in Ireland”

So, when it comes to the energy outputs of the tech industry, the moral of the story here is: corporations bad, individuals good, right? No one’s getting off scot-free here, says Lumley. Even if you try, you can’t decide not to participate in a data driven world. “Once you have a passport, once you generate a medical record, that data needs to be maintained. Digital records have to be kept,” notes Lumley.

And steaming aside, how many IoT devices are lurking about your household? All those Alexas, Nests, Hue bulbs and wearables constantly generate and transmit data in the background. They might be relatively low-power/low-data but last year the number of active IoT devices reached 26.66 billion and will continue to rise.

“We need to think about data in the same way as aviation. We cannot continue to consume energy and create emissions as irresponsibly as we are at present globally. If we cannot, one suggestion is that access to streaming services or whatever it may be is rationed per user,” he adds.

Whatever the range of solutions to reduce or offset humanity’s carbon emissions, one thing is clear: our concept of a “free” internet with cheap and instant entertainment is coming to an end as we slowly realise that the biggest price to be paid is feeding the data centre monster.