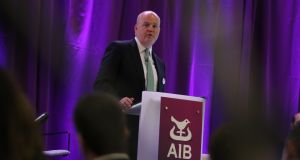 AIB borrowers who wish to extend a Covid-19 payment break from three to six months face scrutiny from the bank if it is likely the crisis will have a long-term impact on their finances.

It is understood, however, that borrowers requesting an extension will be facilitated. The banking industry is preparing to announce plans in the coming days to extend temporary payment breaks for borrowers hit by Covid-19 to six months.

While the initial three-month relief was designed not to affect a borrower’s credit rating or push loans into non-performing territory that would require banks to set aside provisions. AIB chief executive Colin Hunt suggested on Wednesday that lenders would have to make judgment calls in the expected second round of breaks.

AIB is expecting to unveil a provision for an expected rise in bad loans in a first-quarter trading statement next month, Mr Hunt also told The Irish Times after the bank’s annual general meeting (agm), which was conducted over conference call amid Covid-19 restrictions.

AIB has granted payment breaks of up to three months to more than 16,000 mortgage borrowers, 12,000 small and medium enterprises (SMEs) and 12,000 personal customers under an industry-wide initiative agreed last month, Mr Hunt told the agm.

After the meeting, Mr Hunt said he was “very hopeful” of an announcement on an extension of payment breaks by a further three months “in the next number of days”.

“Our determination is, in the same way that Payment Break I was available to customers impacted by Covid-19, that we will continue to roll the payment break out for a further three months where that person has had a direct impact that is not threatening to the long-term viability of their financial position,” he said.

However, he said that if it becomes apparent that the crisis “could have a long-term detrimental impact on your earnings and the viability of your business, that’s something that’ll be considered on a case-by-case basis”.

European banks, including Spain’s Santander, UniCredit in Italy, Germany’s Deutshe Bank and London-headquartered HSBC, have announced billions of euros of bad debt charges between them in the past week as they prepare for a spike in household and business defaults.

Mr Hunt said AIB’s provisioning would reflect the extent to which economic forecasts have been downgraded sharply in recent months.

“Given the fact that we ended February with an unemployment rate below 5 per cent, and that we’re going to see an unemployment rate above 20 per cent by the middle of the year, that of course is going to have an impact in the underlying model that drives the expected credit loss provisions,” he said.

He declined to comment on the size of expected loan losses or whether the extent of provisioning may push the bank into loss-making territory, which would eat into its capital levels.

During the agm, Mr Hunt told shareholders: “Your group has a strong balance sheet and capital levels well in excess of regulatory requirements. We came into this crisis well-funded and with one of the highest capital ratios in Europe, this balance sheet strength enables us to support our customers and the economy.

“This is an extraordinary period globally. At AIB, we are working well as a team and are concentrating our efforts right now on supporting our customers and the economy through this exceptionally challenging event while ensuring the wellbeing of our staff, suppliers and other stakeholders. That is what is important – the supports we can offer our customers, communities and country so we can all emerge from this as strong as possible.”

Mr Hunt highlighted to investors that the bank had “a responsibility to be prudent” in its lending, to protect both customer and the bank.

“We have not confirmed any changes to our credit criteria at this point but it is fair to say that our lending criteria remains under review . . . given the very uncertain environment in which we are operating,” he told The Irish Times afterwards. “There’s no point in making unsustainable loans to people.”