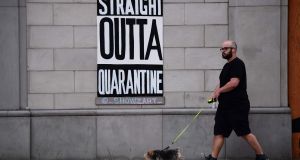 The blow to the American consumer powering the economy was evident in a 7.6 per cent drop in personal consumption data, which marked the biggest decline since 1980. Photograph: AFP via Getty

The US economy shrank in the first quarter by its fastest rate since the 2008 financial crisis, ending the longest expansion on record as lockdowns aimed at curbing the coronavirus pandemic choked off economic activity.

Gross domestic product, or the value of all goods and services produced by the economy, shrank at an 4.8 per cent annualised rate in the first three months of the year, according to the preliminary estimate from the Bureau of Economic Analysis published on Wednesday. That marked the steepest drop since the 8.4 per cent contraction at the end of 2008 and compared with economists’ forecasts for a 4 per cent decline in output.

In a rare statement the BEA identified the economic damage from “stay-at-home” orders issued in March, which it said “led to rapid changes in demand, as businesses and schools switched to remote work or cancelled operations, and consumers cancelled, restricted, or redirected their spending”.

The blow to the American consumer powering the economy was evident in a 7.6 per cent drop in personal consumption data, which marked the biggest decline since 1980.

Counter intuitively, healthcare was among sectors that suffered the most, as hospitals stopped performing lucrative elective procedures as the focus shifted to tackling the pandemic. Paul Ashworth, economist at Capital Economics, noted it accounted for 40 per cent of the overall decline in consumption.

While the March quarter GDP figure was buttressed by the strong economy in place before the widespread outbreak of Covid-19, the extent of the collapse caused by the pandemic will become apparent when second quarter data is released, as lockdowns only began in earnest in mid-March. Some economists forecast that the economy could shrink between 30 to 40 per cent in the current quarter.

Kevin Hassett, a top White House economic adviser, on Tuesday said that GDP in the second quarter would be a “big negative number”. The former chair of the White House council of economic advisers, who has been called back to help deal with the response to the pandemic, told CNN he believed unemployment would rise to as much as 20 per cent by June - a number that he stressed had not been seen since the Great Depression in the 1930s.

The extent of the economic catastrophe was reinforced last week when the US labour department said a stunning 26 million Americans had filed jobless claims over the previous five weeks. – Copyright The Financial Times Limited 2020