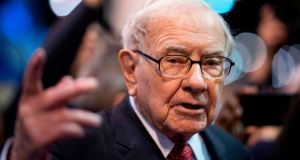 Warren Buffett’s Berkshire Hathaway reported a surge in profits in the second quarter as the value of its stock portfolio rebounded, offsetting a near $10 billion writedown on its largest manufacturing business and a slide in operating earnings.

The industrial conglomerate, which owns insurer Geico, the BNSF rail company and ice cream purveyor Dairy Queen, said net income rose 87 per cent from the year before to $26.3 billion, or $16,314 per class A share, for the three months to the end of June.

The gain was propelled by a broad market rally that helped lift the shares of iPhone maker Apple, its largest stock investment, 43 per cent in the quarter. Its stake in Apple was worth $92 billion at the end of June and accounted for 44 per cent of Berkshire’s $207 billion equity portfolio.

But the earnings of the dozens of companies Berkshire owns outright fell 10 per cent from the previous year to $5.5 billion, which included large declines at Precision Castparts, the aerospace parts supplier that Berkshire acquired in 2016 for about $37 billion.

Berkshire said it would take a $9.8 billion writedown on the unit, reflecting the deep contraction in air travel since the onset of the coronavirus pandemic. Precision Castparts embarked on what Berkshire characterised as an “aggressive restructuring” to cut costs in the first half of the year as demand for aircraft fell. The group has reduced its workforce by 10,000 employees, or roughly 30 per cent of its headcount at the end of last year.

“We believe the effects of the pandemic on commercial airlines and aircraft manufacturers continues to be particularly severe,” Berkshire disclosed in a regulatory filing on Saturday. “The timing and extent of the recovery... may be dependent on the development and wide-scale distribution of medicines or vaccines that effectively treat the virus.”

The company said its aircraft rental business NetJets and pilot training group FlightSafety had also recorded asset impairments and restructuring charges, weighing on their earnings during the quarter. It said it could take further writedowns if the impact from the pandemic on its businesses is worse than it currently forecasts.

“They paid up for that deal and I would not characterise the integration of Precision Castparts as a stunning success,” said Cathy Seifert, an analyst who covers the company at CFRA Research. “Now we are seeing tangible proof of that.”

The writedown of Precision Castparts came just months after Mr Buffett conceded that he had bet wrong on the airline industry. Berkshire in April sold all its holdings in American Airlines, Delta Air Lines, Southwest and United Airlines.

Despite the weakness across many of Berkshire’s businesses, the company’s cash pile climbed to a record $146.6bn in the second quarter, up from $137.3 billion at the end of March. The company said it had used $5.1 billion of its cash to repurchase shares in the quarter.

Investors and analysts have criticised the rising cash levels at Berkshire this year, particularly as the company’s stock has lagged the broader market. Berkshire class A shares are down 7.4 per cent so far this year, compared with a 3.7 per cent advance by the benchmark S&P 500.

Mr Buffett has shown some appetite for the dealmaking that helped make Berkshire a household name after mostly sitting on the sidelines during the worst of the market sell-off in March and April.

The company, which dumped $12.8 billion worth of stocks in the second quarter, ploughed more than $2 billion into Bank of America in late July. It reported buying shares of the US lender every day in the final two weeks of the month. In July it also agreed to buy the natural gas transmission business of Dominion Energy for $4 billion and assume $5.7 billion of the group’s debt.

James Shanahan, an analyst at Edward Jones, added that the company’s disclosure with the Securities and Exchange Commission indicated it had continued to buy back its own shares in July.

“I’m optimistic that if they are in the market buying shares of Bank of America, which they are required to report publicly... they are probably buying other stocks,” he said. “It is a really important catalyst for the stock given the growing cash balance and the drag that puts on earnings.”

Post-Brexit red tape continues to stall deliveries 06:54
Covid to hit housing, pay to remain flat and a very Irish hybrid 06:40
Governments must plan how we will return to normal as more people are vaccinated 06:00
Professional salaries will be flat in 2021, says Morgan McKinley 05:35
Biden has promised to ‘restore the soul of America’ but what might that mean for Ireland? 05:30
Search executive
jobs on irishtimes.com