Ecommerce sales rise despite easing of restrictions, spending in restaurants down 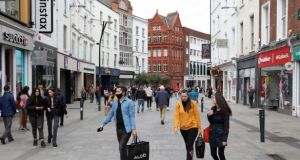 Online spending rose despite the easing of restrictions

Online spending has increased 7 per cent since lockdown restrictions were lifted, despite the re-opening of stores, new figures show.

Two new studies show consumer spending has risen shaprly since the State first emerged from lockdown. However, the type of spending happening shows people are still largely focused on staying close to home.

Figures supplied by digital bank N26 shows consumer spending up 32 per cent since the lockdown with average transaction value rising 19 per cent to €37 from €31.

Unsurprisingly, a shift away from cash is notable with such payments down 30 per cent since restrictions started to be lifted. Card transactions are back to pre-lockdown levels.

N26’s figures show Lidl was ranked as the Republic’s “top lockdown merchant” followed by Amazon and Supervalu. Amazon has since overtaken Lidl as the lead merchant. Meanwhile, Deliveroo jumped from tenth place to fourth during the lockdown as consumers ordered more takeaways.

Separate data from Revolut for the month of July, shows spending in hardware stores jumped 103 per cent year-on-year, although demand has tapered off slight since May. Garden centres also saw increased sales, with spending almost doubling compared to the same month a year ago.

Spending in pets shops also rose significantly, up 92 per cent versus July 2019, while bicycle shops reported a 38 per cent rise in sales.

Demand for hairdressers and barbers was up 44 per cent and spending at off-licences rose 20 per cent.

Perhaps the biggest increase in spending has been on downloadable content, which was up by 165 per cent year-on-year. Digital game sales rose 139 per cent last month.

Spending in bookstores was up 9 per cent in July while fast food sales declined 12 per cent versus the same period a year ago.

Spending in restaurants was 46 per cent lower last month with the number of Revolut users paying for meals down 25 per cent compared to July 2019.