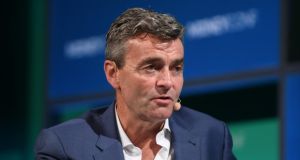 Ding chairman Mark Roden: “We need to get really big in one vertical.” Photograph: Eóin Noonan/Sportsfile via Getty Images

Irish mobile top-up provider Ding is considering a plan to raise €40 million in growth equity within the next two years to fund expansion beyond its core business.

The deal would be the company’s first external fundraising and could be used to finance acquisitions, to expand into new areas and partner with mobile payment players and cryptocurrencies.

“There are opportunities to explore things already in our existing business,” Mark Roden, Ding’s chairman and majority shareholder, told The Irish Times. “We can increase the engagement with digital payments by adding Square as a payment method and we could add bitcoin. There is no denying bitcoin’s relevance and its explosive growth but it’s one we haven’t defined a position in yet.”

Ding, which was founded in 2006, enables expats to support family and friends back home by facilitating the instant transfer of credit top-up to any mobile phone anywhere in the world.

The company, which boasted of revenues worth $500 million last year, connects users through more than 400 mobile operators in more than 130 countries. The Dublin-based firm, which has 200 employees worldwide, has regional offices in New Jersey, Miami, Barcelona, Dubai, Dhaka, Paris, Bucharest and is hiring.

Finding prospective equity partners is at an exploratory stage and no bankers have been appointed yet, according to Roden. As Ding is very profitable, Roden said he wouldn’t be looking for more expensive venture capital.

“The company would consider taking on strategic investment or buying rivals but there is nothing active on either front at present,” he added. “One thing is for sure we are in growth mode and we would have to carefully examine how we could use any potential investment to really fuel this growth even faster.”

Roden, a former EY Entrepreneur of the Year and a co-founder of Denis O’Brien’s Esat Telecom, believes external partners will bring in capital, analytical rigour to future deals as well as help Ding attract more talent.

“When you have an institution like BC Partners or Vitruvian on your shareholder register, you move away from the perception that this is a privately-owned company and we don’t know if he’s ever going to sell or go public so you become more attractive for attracting talent,” he said.

Ding, which has completed three acquisitions, may undertake further M&A in the future although the focus is on organic growth for now. “The most important thing we can do is to grow the business as fast as we possibly can,” he said. “Ultimately, investors like growth.”

Some Ding customers are already using the platform “informally” for small purchases but it is not something the company is promoting because they are not regulated to do so.

“We have evidence of that but it’s not something we promote and it’s not something we are licensed to because airtime is unregulated, said Roden. “If we were to promote cash out of the mobile phone then we would fall into having requirements on KYC [know your customer] and those sort of things.”

Roden admires what challenger banks World Remit and Revolut have achieved in disrupting the market for digital money transfers but said it could be costly for Ding to enter.

“We need to get really big in one vertical,” he said. Once you achieve that, do you do more of the same or do something different such as the mobile money route like World Remit or a card-related route like Revolut. Each of those are really big expensive plays and Revolut has raised $200 million recently to fund that. “

Ding is connected to more than four billion phones through 400 mobile operators and has seen spectacular growth in the Gulf, India, and clients sending top-ups from the US to Central America and the Caribbean and from Western Europe into Africa.

Ukraine is Ding’s biggest market for reparations from Russia among the former Soviet nations but has been buffeted by the recent ruble crash as well as conflict in the region over the past three years.

Roden is optimistic that Ding could establish itself on the Irish market and other developed European markets. “I have kids and they have prepaid phones and there isn’t a single site to go to,” he said. “One of them is on Vodafone and one is on Three. You can do the top-up on AIB but if you had all three in the same place and it would be much easier.

As for an eventual exit for the business, Roden doesn’t fancy the prospect of a flotation but a trade sale of the business is something that may be considered down the line.

“I think IPOs sound sexy but the reality is that it can be an arduous place to succeed unless you have profits north of €50 million,” said Roden. “A trade sale is a possibility but it’s certainly not anything we are looking at now.”