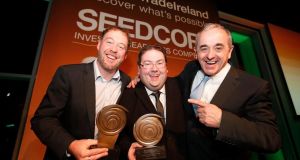 When the upheaval of Brexit comes to mind so does the Jim Rohn quote “If you don’t like how things are, change it! You’re not a tree.”

Change is indeed upon us and, unfortunately for those trees that can’t move, so is a mountain of paperwork.

There is going to be a sea of regulatory paperwork to wade through as Britain’s fund managers weather the stormy move from European Union regulation to a new British compliance not to mention the negotiations on EU access.

It’s hoped that Dublin’s IFSC will benefit from the break-up but it all seems a bit of a waiting game at the moment.

Dundalk-based start-up Gecko Governance is already benefiting from the Brexit vote but not in the way you might think. You’d imagine that for a company which hosts a fund management regulatory solution, Brexit is music to its ears. With the new regulations, fund managers will be looking for a tool to make life easier. However we are still quite some time off that, and therein lies the problem. The longer it takes for Theresa May to trigger article 50, the longer the wait is to implement the solution.

The shock decision for the UK to leave the EU put paid to their plans to expand to a London office in January 2017. It’s forced Gecko’s hand to think bigger and, still vying for a slice of the investment fund pie, it is opening an office in New York instead.

While the US was always on the cards for Gecko Governance, it had intended to initially focus on London, chief executive Shane Brett explains. “All along we’d two people to run our London office, we were opening our London office in January and basically because of Brexit and because people in London are kind of sitting on their hands now, they are afraid to spend money on new software. Because they don’t know what the future regulatory world is going to look like, so we’ve decided to put off London for a while and instead on January 9th we’re opening an office in New York.”

Working with Enterprise Ireland, the start-up won a place on the Access Silicon Valley programme in 2015 so the decision to change locations has been smooth given the network already developed stateside. Brett has secured a space in their NY offices on Park Avenue where they will count The Waldorf Astoria as one of the neighbours.

“The plan is me and one of the other guys on the team are going to go over there full-time – I’m only going to be over there two weeks out of the month initially. In London you have to knock on doors to get made. In New York, people are emailing us and saying can you please come in and show us the product. Two years down the line I think London will be great [for us].”

Brett comes from a hedge fund and asset management background plying his trade for the last 20 years in Ireland and the UK. After the financial crisis, he started up consultancy company Global Perspectives in London. It was during this time, while managing compliance projects for fund managers, the idea of moving compliance task management to one centralised dashboard came about.

“I spent six months in the market trying to find something, wanting to buy something for my own consulting business in London and couldn’t find anything. It was with that in mind I said ‘right I’m moving back to Ireland – and I’m going to fix this compliance problem for fund managers’.”

Co-founder Mark McHugh came on board when Brett posted on Facebook that he was looking for someone to bring the product to life on the technology side. The pair had been in school together.

It’s two years since the first cups of coffee about the business came about and Brett and McHugh secured their first client in investment services company DMS over the summer, with a couple of more large companies in the pipeline. “It takes time with these big financial companies, they move like battleships, they turn very slowly,” says Brett.

Having signed a deal with Dell to use their hosting facilities in the UK, Gecko Governance has expanded to a staff of seven. They have picked up several awards along the way, including the best new start-up in the InterTradeIreland’s Seedcorn Investor Readiness competition. The accolades have certainly brought plenty of interest from investors knocking at their door, says Brett,

“To date we have funded everything ourselves but, since October, we’ve been contacted by seven different VC groups. We have two offers of funding on the table at the moment and we have two others that we expect to get before Christmas. We will have it all sorted by January. It will probably be in the region of half a million to a million and what we’ll do with that is take on another couple of people in Dundalk and then potentially there will be three people in New York.”