As electric cars take over, where will the juice come from? 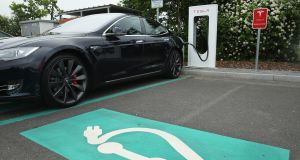 It has been said and suggested often over the past 15 years, but it really does now seem as if we stand on the cusp of a major revolution in motor transport. One in which we leave behind our internal-combustion past and move to electric power for everyone.

As I write these words, we are on the eve of the Paris motor show, and tomorrow both Volkswagen and Renault will reveal cars (one a concept of a 2019 model, one which will go on sale next month) that offer a 400km range on a single charge. Mercedes and others will show cars and concepts with 500km ranges or better, all due on sale before 2020. Suddenly, after years of waiting in the petrol-fuelled wings, electric cars are starting to look like something we can all buy into.

Which leads to a significant question. Where is all the juice going to come from? We’ve been told for years that the world’s electricity grids are ageing and often fragile, and more than one futurologist has predicted a return to 1970s’-style brownouts and rolling power cuts. Well, it might do something for the sales of Monopoly perhaps.

According to a report by the European Environment Agency, “the potential of renewable energy sources to power electric vehicles can contribute to a considerable decarbonisation of the future road transport sector and improved resource efficiency. It also has associated co-benefits in terms of reduced air pollution. However, the extent to which this may occur varies greatly by country, in terms of how the demand for additional electricity for electric vehicles can be accommodated.

That’s a figure that chimes with a study from the influential US think-tank, the Rocky Mountain Institute, which said that “as oil demand drops, electricity demand grows. Electrical utilities could see a 10 per cent increase in energy demand by 2035. The extent to which additional power capacity is needed depends on how intelligently the vehicles charge. If the vehicles charge randomly, additional peak capacity would be needed.”

The EEA reckons that the gap could be as much as 150 gigawatts once mass electric car sales really kick off. To put it in perspective, a commercial nuclear reactor pushes out about 1.2 gigawatts. Do we need 150 or so new nuclear power plants to generate energy for all our electric cars?

Not according to the ESB. Paul Hand from the ESB Corporate Centre told The Irish Times that “because electric vehicles (EVs) make much better use of energy, the energy used by the national car fleet, when it becomes fully electric in the future, will reduce to about a third compared to ‘business as usual’.

“As a result, the country’s total primary energy requirement will reduce significantly with the displacement of petrol and diesel. In fact, it has been stated that the European electricity system has sufficient generation and transmission capacity to accommodate the full electrification of personal transport, provided that the charging is managed correctly. Studies carried out in Denmark – a country with a similar population of 5.6 million, 2.3 million vehicles and annual electrical energy requirement of around 34 TWh [terawatt hours] – found that the full electrification of those vehicles would add just 12.5 per cent to the energy requirement.

“To explain smart charging: if electric vehicles were charged at the peak time of day for electricity use nationally, at present around 7:45pm, with variations during the year, this could in future increase the need for new generation plant. However by charging overnight, say between 11pm and 7am, no additional generation would be required until more than 70 per cent of all privately owned vehicles in the country have switched to EV.”

The ESB expects that electric vehicles will even eventually become useful for storing energy generated by unpredictable renewals, such as wind and solar power. “This can be done by charging the EVs when the wind is blowing strongly and total wind generation is greater than the electricity system can absorb and maintain high levels of reliability,” said Hand.

The fact that cars are now being fitted with larger capacity batteries to increase their range (Tesla now fits a whopping 100kWh battery to the Model S) is also apparently not an issue, as the ESB is working its sums on the basis of the same amount of cars driving the same miles. It does seem as if a population of car drivers plugging in big batteries rather than small ones could eventually lead to significant extra power being needed, but for now the thinking is that it won’t.

And sorry to inform any electric car drivers who think they save the planet from CO2 emissions – thanks to the fact that Ireland still has operating gas, coal, oil and peat power stations, the equivalent emissions from plugging in an electric car works out at around 70-75g/km, which is admittedly better than a non-plugin Toyota Prius, but perhaps not all that much better.

There is a significant benefit to local air quality and health of course, as power stations are generally not in city centres and don’t vent soot and nitrogen oxides into people’s faces. The ESB’s carbon-intensity figure has also fallen by about half since 1990 and is still descending.

Either way, according to the ESB at least, Ireland doesn’t need to start breaking ground on nuclear reactors or damming up the Liffey just yet. “Ireland currently has spare generation capacity,” says Hand. “And, while sales of EVs are increasing and predicted to become dominant in private cars by around 2040, they will take a while to become truly significant in terms of electricity use.”

NISSAN WANTS TO POWER YOUR HOME TOO

Nissan is to provide battery stacks that can power homes and offices, and they can be made from batteries recycled from the Nissan Leaf electric car.

New xStorage devices are being made in a collaboration with Nissan, energy experts Eaton and low-emissions firm Mobility House. They are essentially the same as the lithium-ion battery stacks in electric cars – and are indeed sometimes made from recycled car batteries. The batteries have a limited lifespan in cars, because of the rapid recharge and discharge cycles, but they can be used for other applications once their motoring life is over.

One of those applications is providing power to homes and businesses. The xStorage packs charge from a combination of mains power (at off-peak times) and solar energy and then release that stored power at peak times, potentially cutting energy bills significantly.

Paul Willcox, chairman of Nissan Europe, said: “With this product, consumers will finally be able to take control of how and when they use energy in their homes. With the launch of xStorage Home, we’re fast approaching a consumer energy revolution. xStorage Home will deliver real world benefits for smarter, more affordable and more sustainable energy management.”

The system can also be set up to allow users to sell energy stored in their batteries back to the national grid at peak times. xStorage packs can be pre-ordered in the UK, Germany and Norway. They cost between €3,500 and €5,000 for a domestic unit, with VAT and fitting costs on top. The system will be available in other markets soon.

Frank Campbell, president of Eaton Electrical and Corporate EMEA, said: “Working in partnership with Nissan, we have developed a range of affordable, ready-to-use home energy storage solutions, giving consumers a choice of six options. While other home energy storage products are available on the market, we aim to avoid hidden extra costs and achieve the lowest possible total cost of ownership.”

To demonstrate the potential of the system, Nissan, Eaton and Mobility House have installed an enormous version, called the xStorage Building, at the Amsterdam Arena stadium, home of the Ajax football team. The Building consists of 280 recycled Nissan Leaf battery stacks and can store, and output, up to four megawatts. That, claims the managers of the arena, will keep the stadium lights on, and also supply some of the surrounding residential areas, in the event of a mid-match power cut.

Nissan has also confirmed it will start testing self-driving cars on European roads in 2017, and several key autonomous systems are being earmarked for the next-generation Nissan Qashqai. According to a survey called Freeing the Road: Shaping the future for autonomous vehicles, which Nissan commissioned from independent thinktank Policy Network, self-driving cars could contribute as much as €17 trillion to the European economy by 2050.

Policy Network also quizzed 6,000 consumers across six European nations, and 23 per cent said that they would consider buying a robotic car in the next five years. Respondents (58 per cent of them) also said that one of the biggest advantages of robotic cars will be increased mobility for those who cannot drive while 52 per cent said that a reduction in accidents would be the biggest societal contribution of autonomous cars.

Willcox added “what’s clear from the research published today is that political decision-makers across Europe need to prioritise autonomous vehicle policies to create a favourable environment that will see this technology flourish. The customers want it, and are starting to see the benefits of an autonomous future, but we need the right legislative environment to enable this exciting new era of mobility to thrive.

“We strongly advocate that policy makers continue to work collaboratively with industry, so that together we can ensure that the many social and economic benefits highlighted today are made a reality in Europe.”