Science finds you can teach an old dog new tricks 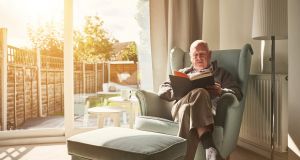 While the majority of neurons are already in place at the time of birth, neuron production continues in certain brain regions. Photograph: iStock

Common wisdom holds that you can’t teach an old dog new tricks. It is a handy excuse to apply if you have a recalcitrant older dog who refuses to do its owner’s bidding.

There is a long-held assumption has been that as you age it becomes more and more difficult to learn new things, from playing an instrument to learning a second language.

The assumption is that as the years pile up our capacity to capture and hold new knowledge is lost or diminished significantly enough to render these tasks just too difficult to pursue.

The simple message: exercise your brain and your body if you want to remain sharp

The ageing brain just sits back and wags its imaginary tail, deciding it is easier to kick back and watch online movies rather than learn the French irregular verbs. Being destined to a future defined by an endless supply of box sets however is not what the science is telling us. Researchers have had to cast new theories about the ageing brain given what is coming from their findings that the human brain is far more “plastic” and able to take on new ideas and concepts.

Not so says María Llorens-Martín at the Universidad Autónoma de Madrid, who with colleagues conducted a detailed study of what was going on with neurons in the ageing brain. They published their findings last Monday in the journal Nature Medicine. While the majority of neurons are already in place at the time of birth, neuron production does continue in certain brain regions including an area called the hippocampus. The hippocampus is a key brain region associated with memory and learning.

Llorens-Martín and her group analysed tissue samples from 58 human participants. They found that while there is some level of decline linked to age, ongoing creation of new neurons continues in the hippocampus and several other brain regions through life. Things slow further once you are in your 90s and the researchers also found there was a particularly sharp decline in neuron production in patients with Alzheimer’s disease. But for the rest of us the brain cells associated with memory and new knowledge continue to be produced, suggesting the capacity to learn new things remains intact. The presence of the neurons may account for the ongoing plasticity of the brain even into old age.

This is not the only research that highlights the brain’s ongoing plasticity into later life. Researchers in many countries have reported this, including ongoing work at Trinity College Institute of Neuroscience. The team there is pushing the boundaries of our understanding of what the brain does and what it potentially could do as we advance into later years.

It is interesting to see that efforts by some researchers to develop “exercise” for the ageing brain have been matched by other groups looking at exercise for the ageing body. The rationale behind this research is to find interventions involving exercise routines that can help to reduce frailty in older populations. The key is finding the most suitable exercise programme to deliver measurable improvement. There are many such studies found by a quick visit to PubMed but one preliminary UK study from more than a decade ago showed that a person remains physically plastic well into later life.

This small study divided a cohort aged between 55 and 90 years into three groups, with an age range included in all three, with individuals asked to do a mix of resistance and aerobic activities. The first took only very light exercise that did not tax the individuals in this group. The second were asked to undergo more strenuous activity that elevated respiration and perspiration. The third group hit the gym and started pumping iron. Respiration was up and all participants including those in their late 80s were expected to break a sweat during the exercise programme.

The results suggested amongst other things that the body remained receptive to increased physical activity and could help leave older participants steadier on their feet and less frail. Maybe it is time to turn off the smartphones and screens, not just for the benefit of our ageing population but also for inactive children right up through middle age and beyond. The simple message: exercise your brain and your body if you want to remain sharp.