Does the moon landing really matter any more?

As the 50th anniversary looms, we need to find new ways to excite aspiring astronauts 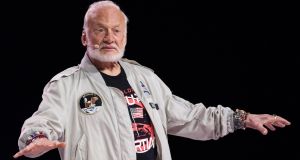 Houston, we have a problem. Technology has advanced so much since the 1969 moon landing there’s no need for astronauts such as Buzz Aldrin, above, any more. Photograph: Jim Bennett/Getty Images

The next generation of space explorers will need a moon landing of their own for fundamental space research exploration to compete with the growing number of commercial interests in orbit.

This month marks the 50th anniversary of the Apollo moon landing. The seminal “where were you when” moment in late 20th-century modern history. To some.

I recently asked a former Nasa engineer turned professor of aerospace engineering if the technical details of Nasa’s lunar landing were still relevant to any course modules he taught at either undergraduate or postgraduate level.

Not really, he said, but, given the year that was in it, he had just asked a group of first year engineering students what they knew about the events of July 1969. One said Nasa made it to the moon in the 1940s, while another suggested JFK was the first person to set foot on it.

It may matter to older generations (and rightfully so if only because fellow humans risked their lives in the name of exploration) but the moon landing might as well have been part of some egregious narrative for anyone under 30 which was fed to them in Leaving Cert history class.

Technology has advanced so much over the five decades since the Apollo moon landing that there’s no need for Neil Armstrongs or Buzz Aldrins any more. Why risk human life when robots can do a better job without any supplies of heavy space lasagne, not to mention the human cargo, weighing things down?

Robotic astronauts may not generate as much public excitement but they generate a lot more data than the homo sapiens they frequently replace. (Nasa’s incredibly successful, and surprisingly cost effective, trip to Pluto being an obvious example).

So even robots in space are now passé to the kids. On top of that the commercial space sector is an increasing distraction. Not least because it offers the pragmatic heirs to the generational throne, Gen Z, more employment opportunities, particularly in areas such as Earth imaging, telecommunications and space tourism.

In addition, the antics of the smart, crazy and rich (one day “Musk” will be an adjective referring to people embodying all three) appeal to younger generations because of the perceived pace at which companies such as Elon’s Space X or Jeff Bezos’s Blue Origins are moving (despite much of it being speculative at this point).

The entrance of ambitious, commercially-driven entities into the fray is welcome but balance must be maintained between free-market enterprise and simply satisfying humankind’s inherent curiosity to boldly go where they haven’t gone before. This will only be achieved if we find new ways to excite the next cohort of aspiring astronauts.

Its important to note, however, that at this point it’s not so much an us versus them scenario. Many commercial space entities are innovating and solving important problems applicable to fundamental space research in the same way the European Space Agency, Nasa and others spend their time. In fact, public private partnerships are so central to current space related projects, it takes one back to the days when Bertie and the trade unions were BFFs.

With so many questions remaining unanswered, no one can really afford to get too territorial about it any way.

However, there is always the risk that space exploration will continue only if someone, somewhere is profiting from it.

So how do we maintain interest in space research for its own sake? It’s always helpful to be able to articulate some kind of unique generational challenge to motivate the latest group of aerospace hopefuls.

There is no doubt the fundamentals of space travel have improved in terms of reliability, safety and technological capabilities. But, essentially, we still use a firecracker to send people or cargo out into the stratosphere. And Mars, while never far from the average person’s mind, is too far away for anyone closer to the technical details to be hopeful we’ll successfully carry human cargo to the red planet any time soon.

The only solution to accelerating the process of reaching Mars is unequivocally outlined in the title of a recent book on said topic by Rand Simberg – Safe is Not an Option: Overcoming the Futile Obsession with Getting Everyone Back Alive that is Killing our Expansion into Space.

One wouldn’t need to read the preface to understand what this author is trying to get at.

For now, Musk’s unrealistic claims that we’ll make it to the moon real soon may be pie in the celestial sky. But even carrot pie on a stick is better than no pie at all.