Tiny bubbles and the importance of pursuing useless knowledge 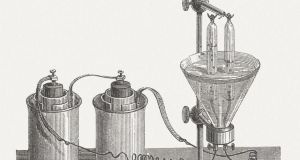 Electrolysis: Researchers at Trinity have found that something unexpected happens when you take a really close look – tiny bubbles form that have surprising properties. Illustration: Woodcut engraving (1877)/Getty

A remarkable discovery was made in a laboratory at Trinity College Dublin about a year ago, one that may change all our lives in the future. Or maybe not. It was the unexpected detection of a new kind of bubble, one with unusual properties that might tell us something important about the expansion of the universe.

Trinity physicist Michael Coey was looking at images taken by his associate Matthias Möbius with a high speed camera during electrolysis – the breaking of water into hydrogen and oxygen in the presence of an electric current. Something unexpected was happening if you got a really close look, tiny bubbles where forming that had surprising properties. Coey and summer student Alice Gillen scrutinised hundreds of images and came to the conclusion they had identified a novel new type of bubble. They were tiny – 10 millionths of a metre across, hence the scientists’ surprise at seeing them at all – and although they looked like ordinary soap bubbles they didn’t act like it.

These tiny bubbles kept popping up inside the much bigger hydrogen bubbles that you expect to see during electrolysis. And instead of a “skin” of soap, these were enclosed by a skin of water in a layer just 100 billionths of a metre thick.

The team ran into a big problem however, one that they could not explain. Gas usually leaks out of a bubble and then it pops. These little gas bubbles did too but at a rate 1,000 times slower than expected. The researchers reached the conclusion that the millions of water molecules that formed the bubble were “ganging up” to block the gas molecules as they tried to escape.

Bursting miniature bubbles might not sound like the most fascinating of research topics but the curiosity of the scientists got the better of them and they sat down with their maths professor colleague Siddhartha Sen to help them interpret what they were seeing.

Sen studies something most of us have heard of but few of us understand – quantum mechanics. He is a quantum field theorist and between them the scientists decided the gang-like behaviour they were seeing somehow involved “quantum fluctuations”. Details of the effect were published several weeks ago in Electrochemistry Communications.

Great you might say, more useless knowledge to pile up on all the rest of the useless knowledge out there. Good thing we know about those bubbles. But then again maybe it is. Quantum fluctuations are an important part of understanding how our universe works. It relates to the temporary change in the amount of energy at a point in space, known as the Heisenberg uncertainty principle (yes, the same name as chosen by character Walter White in the Breaking Bad series). The bubbles may help us understand what is going on with different quantum effects. That’s a very big deal in physics.

It may still seem like useless knowledge to many of us but then when scientists discovered how to produce electricity no one had an idea of how to use it. The ability to produce radio waves was a similar case. All the science that was there to explain what was going on was useless knowledge until radio, radar and other technologies were introduced.

What hidden promise do these Trinity bubbles hold? Are they useless or useful? Time will tell but history records that what is first tagged useless may later become useful, one might even say essential as in the case of electricity and the electromagnetic waves that give us radio and television. One of Ireland’s greatest scientist William Rowan Hamilton developed a new form of maths called quaternions in 1843. Initially they seemed pointless until they became important in quantum mechanics in the 1900s and more recently as a way to control movement in computer games.

Another great Irish scientist George Francis FitzGerald defended the pursuit of curiosity-driven research when writing a piece in Nature on February 25th, 1892, titled The Value of Useless Studies. He castigates those who criticise universities that “devote themselves to useless studies”, declaring, “If universities do not study useless subjects, who will?” He adds: “The business of universities is to advance culture and knowledge, and to afford students an opportunity of learning how to do this.” He, by the way, was an early contributor to Einstein’s special relativity theory.

These sentiments are echoed in a timeless essay penned in 1939 by Abraham Flexner, the founding director of the Institute for Advanced Study in Princeton, entitled The Usefulness of Useless Knowledge. This has just been reprinted by Princeton University Press with a companion essay by Robbert Dijkgraaf, the current director.

“Institutions of learning should be devoted to the cultivation of curiosity and the less they are deflected by considerations of immediacy of application, the more likely they are to contribute not only to human welfare but to the equality important satisfaction of intellectual interest which may indeed by said to have become the ruling passion of intellectual life in modern times,” Flexner wrote. “We make ourselves no promises but we cherish the hope that the unobstructed pursuit of useless knowledge will prove to have consequences in the future as in the past.”