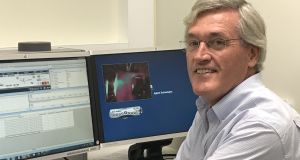 A research team in Cork has come up with a way to break down the antibiotic resistance shown by some infections. It shows such promise that the scientists at the Biomerit Research Centre at University College Cork have already applied to patent the discovery and may have a company up and running within two years.

“This is heading for commercialisation,” says Prof Fergal O’Gara, director of Biomerit. “We are talking to Enterprise Ireland’s translational team and hope to benefit job creation in Ireland.”

The discovery is timely because of the growing antibiotic resistance seen in many of our most common infectious bacteria. It could prolong the lifespan of our main antibiotics and certainly would be of great benefit to patients, says Prof O’Gara, who is also director of the West Australian Human Microbiome Collaborating Centre at Curtin University in Perth.

The new treatment works by countering the main way bacteria protect themselves against antibiotics. Once an infection sets in, the bacteria begin to form “biofilms”, an accumulation of bacteria that causes a protective film to form over them. The bacteria behind the film are susceptible to any administered antibiotic but the drug can’t reach them because of the film, Prof O’Gara says.

“It has become a very important global issue in healthcare. How are we going to protect society from invading organisms? Biofilms are also a breeding ground for the emergence of antibiotic resistant strains,” he says. Bacteria readily “share” genes and some of these impart antibiotic resistance. This sharing can readily occur under the protection of a biofilm.

The realisation there was a problem dawned some years ago, he explains. The companies developing the new antibiotics worked on the assumption that bacteria causing an infection were all “free living cells”.

“With new imaging technology and biotechnology about 10 years ago it became clear that when microbes infected the body the main configuration was not free living but the creation of a biofilm,” he says.

Until then the approach was to come up with antibiotics that could penetrate the biofilm. “Unfortunately when those anti-infectives were tested they were not as effective as anticipated because the biofilm allowed [the bacteria] to survive.”

Five years ago he and colleagues Dr Jerry Reen, a microbiologist, and Dr Gerry McGlacken, a chemist, joined forces and took an alternative multidisciplinary approach. “Instead of trying to stop the growth of a pathogen with existing antimicrobials, the new approach was to try and disrupt the development of the biofilm,” Prof O’Gara says.

An acute infection can become chronic if a biofilm forms, and this process is driven by microbial signalling. “We interfered with the signalling code and have fooled the bacterium, locking it into the free-living, non-biofilm configuration. The critical thing is when you do that and get free living cells, existing antimicrobials become effective.”

They call it a “bioblocker” and moved their discovery into the patenting process in 2015. “This is a natural product from a bacterium,” he says. “We have tested it and it is not cytotoxic, a huge advantage because we can progress development immediately.”

There is a wide range of areas where control of biofilms is an important issue. “With the translational component the strategy is to take a phased approach,” he says. “We envisage the first significant application is for reducing infection in contact lenses. The lenses are immersed but cannot prevent biofilm formation.”

If biofilms form on lenses they irritate the eye and will not resolve without some intervention. “We have added the mimic to the solution and have tested the effectiveness of that and we know it works,” he says.

The second application is in topical creams that carry the bioblocker. This would be a help to burns patients or those with exposed wounds. It could also be used on the skin adjacent to where medical implants such as surgical drains are fitted or other tubing. “Preventing biofilms would have a very significant impact on recovery in that kind of injury,” he says.

The third application relates to the insertion of implants that will remain in place for some time such as catheters and other medical devices. These are particularly susceptible to biofilm development and helped researchers realise the scale of the problem. This third approach involves incorporating the bioblocker into the device itself as a surface coating that can be applied to stop development of biofilms on implants.

The team has published research papers describing the effectiveness of the bioblocker with dangerous fungal pathogens such as Candida albicans and Aspergillus fumigatus. It also has potential to serve as a “game changer” in clean technology systems for electronic devices where microbial contamination must be avoided, he says.

Prof O’Gara believes that within two years his bioblocker will already be having an impact in the contact lens area. “We are already talking to players in this sector and plan to develop that,” he says.