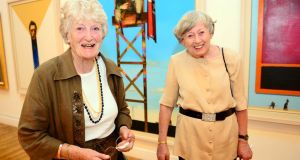 Prof Dervilla Donnelly (left) was taken aback by her selection for the award: Photograph: Eric Luke

Prolific scholar and former professor of chemistry Dervilla MX Donnelly has been awarded the Royal Irish Academy’s Cunningham medal at a ceremony in Dublin.

The award, the most distinguished presented by the academy, was given as a recognition of her “outstanding contributions to scholarship and the objectives of the academy”, the body said.

Prof Donnelly is the first woman to receive the Cunningham Medal in the award’s 220-year history. The first was presented in 1796 to Thomas Wallace and 44 medals have been presented since.

Prof Donnelly is a graduate of University College Dublin and served as a lecturer there. She is internationally regarded for her important contribution to the study of phytochemistry, the chemistry of plants.

She is a former governor of the Irish Times Trust and served on the company’s executive board.

The academy’s president Prof Mary Daly said she was “delighted” that Prof Donnelly was to be the 2017 recipient. Prof Donnelly has had a career of incredible length and depth, Prof Daly said. “She has built a stellar career as an internationally networked and recognised scientist.”

Prof Donnelly was taken aback by her selection for the award. “I was surprised,” she said. “I couldn’t believe it, but it slowly sunk in and I am so honoured.”