‘Tech under Trump’ a core topic at SXSW festival

This year’s SXSW conference in Austin, Texas, is not shying away from politics 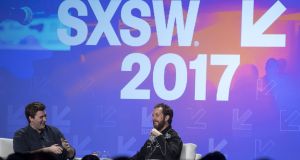 It is estimated that, within two years, Hispanics will be the largest race in Texas and by 2042, they will outnumber all other groups here combined. This is a place where President Donald Trump’s actions on border security will directly impact everyday life for thousands of people.

This, however, didn’t stop the Mexican embassy from offering some comic relief by building a “piñata wall” along one side of the Mexican-American Cultural Institute in downtown Austin for this year’s SXSW Conference 2017. With up to 20 “Tech Under Trump” sessions already scheduled for the coming week, this overtly politicised “Interactive” leg of the SXSW franchise is pulling no punches when it comes to taking on thorny subjects.

“I hope the new administration is critical of what they see and hear at this year’s event,” SXSW director of programming Hugh Forrest told The Irish Times. “There are still a lot of unanswered questions regarding Trump’s tech and innovation policy.”

The crowd don’t seem to object. “Politics is at the heart of every aspect of American society so it doesn’t surprise me that a president as controversial as Donald Trump would be a major focus at SXSW,” one pundit observed. “He was going to come up in most panel discussions anyway so why not just make it official!” said another.

From Obama to Biden

A number of other themes dominate the Interactive schedule including AI, a subject which, despite having what seems like too many related events on the bill, is still drawing huge crowds. Too huge. This is one of the biggest problems for pundits at this event: long lines.

So far, several talks and panel discussions have already been oversubscribed up to an hour before they even begin. Whether or not this is a failure on the organiser’s part to correctly estimate which talks will draw the biggest crowds and allocate suitably sized rooms accordingly, or just the luck of the draw, it remains one of the biggest challenges to the continued success of SXSW. “You’re with the Irish what? No sorry buddy, you still can’t get in, we’re full.” Playing the “Irish journalist” card in Texas is hit and miss.

Thankfully the “people watching” here is second to none. At any given moment, you could be rudely staring at a Muslim tech start-up guru, a Native American glass pipe artist, a neurospeculative Afrofeminist, or all three. If you’re lucky, the Afrofeminist might invite you to her “neurocosmetology lab” – a VR experience where black women (the most underserved market in tech) are the pioneers of brain optimisation. Here, instead of ordinary braids, customers are “fitted with transcranial electrodes that allow access to a surreal digital temple blending the physical with the digital”. Sure why not?

If you’re unlucky you could be stuck beside the self-proclaimed chief executive of “the next Apple”, or a leading expert in “fetishisation” theory. Interactive is awash with tech start-up hopefuls who think “networking” means cornering journalists from foreign lands and spitting in their face as they talk about their company “TechStratum” or “DigiWon’t” ad nauseum. Most are a few business cards short of a full boardroom.

The other stereotype worth avoiding are the various academics peddling their new books about some drivel or another. While less inclined to shoot business cards at you like ninja stars than the tech start-up guy, they will assume you’re interested in their sociological theory. Best thing to do in this situation is disagree with their thesis in some way as early on as possible. The sooner you can do that, the more likely they are to already be walking away.