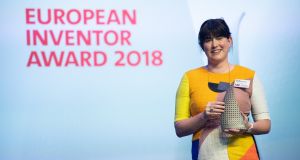 Ms Ní Dhulchaointigh, who originally comes from Kilkenny, is the first Irish person to win the award in its 12-year history. She and her team were nominated for an award in the small and medium-sized business category.

“By enabling us to more easily fix and improve the things we own, Jane Ní Dhulchaointigh encourages us to take a more sustainable approach to our possessions and reduce waste as a consequence,” said EPO president Benoît Battistelli.

“Her success in establishing a unique, sustainable consumer product underscores both the innovative strength of Europe’s SMEs and the benefits of patents in reaching such goals.”

The annual awards recognise outstanding inventors from Europe and around the world who have made an exceptional contribution to social development, technological progress and economic growth.

Chosen by an independent international jury, more than 500 teams and inventors were in the running for awards.

Speaking to The Irish Times before the awards were announced, Ms Ní Dhulchaointigh said it was “humbling” to have been nominated.

The timing of the award is somewhat bittersweet for the Irish woman as the company behind Sugru, FormFormForm, was sold recently to German adhesives expert Tesa in a deal that saw investors recover only a fraction of their money.

Four women inventors have been named as award recipients this year, the highest number since the European Inventor Award was launched in 2006.

The research category was won by German biophysicist Jens Frahm. Swiss physicist Ursula Keller was awarded the Lifetime accolade, while Erik Loopstra from the Netherlands and Vadim Banine (Netherlands/Russia) won the popular prize, which is chosen by the public in an online poll.