Sticking with Sugru through thick and thin 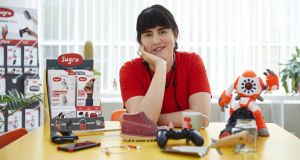 Jane Ní Dhulchaointigh: “Fixing things is not something most people think to do. Sugru is about quick easy fixes, small fixes that anyone can do”

It has been a bit of a rollercoaster few months for Kilkenny native Jane Ní Dhulchaointigh. The inventor of Sugru and co-founder of FormFormForm, the company that makes it, has had some difficulties in the past few months, culminating in selling her business to German adhesives expert Tesa last month.

But if you think the journey for Sugru and the team behind it is done, you’d be wrong. The invention has just scooped a prestigious award, the European Patent Office’s European Inventor Award, which was announced Thursday. “It’s a strange time, in a way,” she said. “But there is also a positive vibe to it.”

The award puts Ní Dhulchaointighin an elite group. Inventors from all around the world are considered for the awards, so making the final was in itself an achievement, Ní Dhulchaointigh said. There is also the fact that she was the first Irish person to win the award in the event’s 12-year history, and that she was one of four women who were honoured this year.

“It’s humbling to be acknowledged,” said Ní Dhulchaointigh. “All the more because Sugru is not a showy or very big invention. It’s a small, humble one. It has been part of people’s everyday lives, and that’s great to be noticed.”

Her competition was considerable. German inventor Thomas Scheibel has developed an artificial spider silk that can be mass produced and used as a next-generation industrial fibre.

Spider silk is one of the strongest materials in the world, but it can’t be mass produced using a natural method; not only do spiders only produce a small amount but any attempt to set up farms would fail because spiders are naturally territorial and cannibalistic. Yet the German biochemist has developed a way to manufacture the fibre artificially.

It is completely animal free, using E. coli bacteria genetically reprogrammed to produce spider silk proteins, which can be spun into silk fibre. The process itself took years to perfect, and Munich-based start-up AMSilk began manufacturing it in 2014.

Because it is strong and lightweight, it can be used in a range of industries, from making medical implants to lightweight sports shoes. It also has some uses in the cosmetics industry in gels and creams. A water-based breathable nail polish was manufactured last year using the material.

The other contender was Swedish inventor Mehrdad Mahdjoubi, who invented a closed-loop shower that uses 90 per cent less water than a standard shower, and also cuts energy-use by 80 per cent. It filters water used in the shower and recirculates it, meaning that instead of 100 litres of water you could use as little as 5 litres.

The positives are the obvious cut in resources used for showering,and it is not subject to the effects of others in the house using showers at the same time – no loss of water pressure or changes in temperature when someone hits a cold tap elsewhere.

It seems there was a common theme for this year’s inventors, with the environmental benefits and impact on resources a factor.

Sugru was the brainchild of Ní Dhulchaointigh, a former Royal College of Art student. She came up with the idea for a mouldable glue while studying for an MA in product design in London. Instead of making more products she wanted to help people fix and improve the ones they already had.

“I had the idea for Sugru in 2003/04, when I was still a college student,” she said. “There have been various stages on the journey – several years was about developing the science and technology behind it.”

Sugru itself went through several iterations – the first Ní Dhulchaointigh has admitted was horrible – before it become the coloured mouldable glue that we can now buy.

In 2009, FormFormForm began selling its product through its website and building an online community. “It was a lot of hard work for a growing team,” said Ní Dhulchaointigh.

Sugru itself has led to thousands of inventions. The website has a section dedicated to uses people have found for the material.

Fancy an indoor herb garden but are tight on space? Some Sugru, a few jars and some hose clamps later and you have a window garden. It can also be used to protect your technology, fix zips, repair broken bits in your fridge, modify games controllers, strengthen phone cables or repair shoes.

“We’re trying to inspire more people,” said Ní Dhulchaointigh. “Fixing things is not something most people think to do. Sugru is about quick easy fixes, small fixes that anyone can do.

“It’s incredible that we are acknowledging inventions that are helping solve environmental problems,” she says, speaking about the shortlist for the award.

The timing could probably be better for the company, but it shows that the idea behind the firm is a good one. It may go some way too towards easing the conflict of the past few months, when FormFormForm essentially realised that, if it wanted to keep growing its sales, it would need more money than the two rounds of crowdfunding and backing from institutional investors it already had.

“The biggest challenge that we faced, with the benefit of hindsight, was about driving awareness at a mainstream level,” Ní Dhulchaointigh said.

The deal with Tesa will give the company that support, she said, and the ability to invest to drive that necessary awareness.

This wasn’t the first time the company had experienced difficulties. Ten years ago the team was pitching to investors in the midst of a global financial meltdown, an understandably stressful experience. Yet good ideas will usually win out, or at least they will if they have the right business plan, and in 2009 an investor provided them with just enough money to launch.

One newspaper review that year changed the company’s fortunes. Bloggers began to link to the site, orders started to come in, investors took note. Before long Time had named Sugru as one of its top inventions – ahead of the iPad – and it had found its way into B&Q, Target and other bricks and mortar stores.

This time around the crisis came to a head last December when the bank with which FormFormForm had agreed a £3.5 million facility decided to withdraw the second half of the funding. That left the firm financially exposed. So it’s been a challenging few months for the team at FormFormForm.

“We’ve had almost daily communications with shareholders and investors,” said Ní Dhulchaointigh. “Within the company there’s a shared disappointment that we haven’t been able to deliver a return for investors. It’s been humbling handling that communication.”

There has been mixed reaction to the news, particularly, it seems, from investors who backed last year’s crowdfund. “The overall response has definitely been one of disappointment,” Ní Dhulchaointigh said. “The majority of investors we have been in touch with have been supportive.”

But she is satisfied that selling to Tesa was the only way forward for the company. “We went through a very thorough process. All the partners that we have, everybody at every stage did their best. The best way to honour the people who have believed in us is to make the product succeed.”