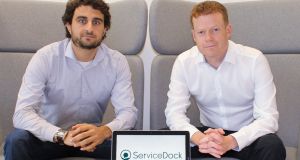 ServiceDock founders Oisín Ryan and Leonardo Correa say their involvement with another start-up, Localmint, was critical to the venture’s success.

Even with the best idea in the world, a promising start-up can be knocked off course by an unforeseen development.

Oisín Ryan and Leonardo Correa are the founders of ServiceDock, a customer feedback and service management platform designed for multi-location businesses such as retail chains and restaurant groups. This revenue-generating two-year-old company has already attracted the attention of high-profile operators in food and retailing. Eddie Rockets and Mothercare are customers and two more well-known names in the home entertainment and DIY sectors respectively are currently trying the platform for size.

ServiceDock is the story of a start-up that has hit the sweet spot and has raised more than €400,000 in funding to develop its platform. However, it hasn’t all been plain sailing. Ryan and Correa didn’t wake up one morning with the word “Eureka” ringing in their ears and a perfectly-formed product ready for market. In fact, their idea has been through three substantial rethinks and they credit their involvement with another start-up, Localmint, as both the catalyst for starting ServiceDock and a valuable source of information when it came to determining exactly what sort of product customers would buy.

Ryan and Ranga Vadhineni founded Localmint in 2013 and Correa was their lead developer. Localmint is still a going concern and is an online directory that helps consumers find local retailers and restaurants easily from any device. When Localmint was launched, no one else was collating opening hours or making it seamless for consumers to find stores from wherever they were. The Localmint platform filled this gap and the founders were confident they had the makings of a profitable business. At its peak in 2015, Localmint employed five full-time staff and had two million active monthly users. Then something unforeseen happened: Google began providing a similar service.

“In effect growth slowed down because of competition, particularly from Google when it started showing opening hours in search results. Google is a double-edged sword. It can help you grow your business but it can also kill it, so we had to start looking for other opportunities,” Ryan says.

“Initially we started working on a customer service messaging app, a bit like WhatsApp for business, but soon discovered it is incredibly difficult to get a product like that off the ground without an existing user base. A real chicken-and-egg situation; so we had to think again.

“From there we pivoted to a customer service platform for large enterprises. This meant abandoning our own messaging app and repurposing the web admin we had developed so that it worked with Facebook Messenger, an app that already had hundreds of millions of users, so no more chicken and egg. This was somewhat successful and we had paying customers.

“However, continuing to target the utility and financial services companies that had shown an interest in our app was a mistake. These companies do not move fast and gradually bigger players integrated with Messenger. Our first-mover advantage quickly disappeared and we struggled to see how we could differentiate our offering in the long term.”

The founders went back to the drawing board and drew on their experience with Localmint for the inspiration for their third product, a customer feedback and service platform for multi-unit businesses. “Consumers were always mistakenly sending Localmint feedback about individual stores within the major chains. We used to send it on to them and most were really happy to get it. This suggested there was demand for a better solution from both sides,” Ryan says. “We combined this insight with our messaging platform to create ServiceDock.”

Ryan says reacting quickly to Google’s arrival on their patch was critical. “Metrics don’t lie. If things don’t add up, you can see it pretty soon and it will become almost impossible to persevere. In our case the analytics were telling us there was a problem and we needed to regroup.

“My advice to others would be to make the call as early as possible because a pivot generally means taking two steps backwards to take one step forwards. You need time, money and energy to do that and all of those things will be in short supply if you leave it too late,” he adds. “Be open to new opportunities and have a plan B. We were able to go from customer service to customer feedback overnight because we had already done some customer validation tests a couple of months before we made the final decision to pivot.”

ServiceDock may be a young company but its product is resonating with retailers because it is offering bricks-and-mortar businesses something they don’t currently have – a store-specific customer feedback and messaging solution that’s similar to that offered by companies trading online.

“No one has focused so specifically on building a customer engagement platform for multi-location businesses before. No one has identified messaging as an effective means of capturing customer feedback in physical locations. No one is facilitating store-specific messaging. No one has thought to integrate customer feedback and service into the same platform. We do all of this,” Ryan says.

“Our product is useful for any business with multiple consumer-facing business locations that want to improve the customer experience,” he adds. “To date we have focused on getting people using the platform in Ireland, but it’s a very scalable solution and we are starting to look at the US. We were recently asked for a demo by one of the largest and most iconic retailers in the world – with nearly 10,000 stores in the US alone – which was surreal but is indicative of the strength of our offering.”

The company has spent about €200,000 developing the platform so far with most of this coming from angel investment. “As far as multi-location customer service goes, we cannot see any direct competitors in the market,” Ryan says. “It is possible to message specific locations through some mobile apps – such as Yelp – but we are really competing with the phone call and email.

“The other big learning for us from what we’ve been through is platform risk. While Google was instrumental in growing traction [search engine optimisation] and generating ad revenue for Localmint, we relied too heavily on it. What Google gave us with one hand it took away with the other. With ServiceDock there was a temptation to build an absolutely amazing product on Facebook Messenger and stick with that, but I am very reluctant to put the company in a similar situation.

“That’s one reason why we are also working with Twitter and our own web messenger. We also plan to integrate with WhatsApp when they open their API [application programme interface] and have some other interesting channels coming online shortly.”