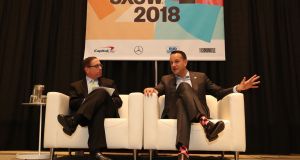 Critics of the SXSW event usually point to the fact that it has grown too big for any one start-up, organisation or even country to make its presence felt. Ireland doesn’t seem to grapple with this problem. Our annual delegation have become adept at making sure it is remembered.

This year’s exhibitors at the Enterprise Ireland start-up stand – located right at the heart of the SXSW trade show – successfully demonstrated the broad potential of our country’s growing indigenous tech sector, despite the overwhelming number of other distractions surrounding it.

Girl Crew, the social media platform exclusively for women who wish to network, either socially or professionally – joined a debate which gets louder each year SXSW Interactive takes place.

Gender and equality of opportunity more generally in tech featured prominently throughout with Melinda Gates, co-chair of the Bill & Melinda Gates Foundation, among the speakers discussing the 21st century workforce and the role of new technologies, business models and social movements in building inclusive workplaces.

Talks entitled “Empowering Women Through Radical Empathy” were sprinkled throughout the programme too while the Irish delegation, led by Enterprise Ireland exhibitor GirlCrew, played their part in highlighting the so-called “elephant in the valley” by hosting an event entitled, “Women In Tech” at the offices of the Irish Consulate in downtown Austin.

Tweak Cloud welcomed festival-goers to the “World of Easy Marketing” with their user-friendly but powerful platform solution for sharing, editing and controlling brand content. With its simple, easy to use, programmes, Tweak Cloud offers firms significant savings on design and agency costs.

FoodMarble represented Ireland’s indigenous medtech sector showcasing their new AIRE device, the world’s first personal, digestive tracker. Already featured on NBC, BBC and in Forbes, the AIRE calculates fermentation levels in the stomach and providing insight into the foods that are most likely to be the source of stomach discomfort. This remote do-health-yourself product is already selling worldwide but now FoodMarble is taking on the behemoth that is the US healthcare market.

We may find Dublin start-up Tito selling us our tickets to SXSW Interactive 2019 as the simple, powerful event software, specialising thus far on major tech conferences, has already sold more than €300 million worth of tickets online by thousands of organisers around the world.

Whether you are buying a pair of shoes or a fleet of cars, the online checkout experience can make all the difference. If its time consuming and requires large amounts of personal information, the sale might be lost due to sheer buyer frustration. Tito has tried to make this part of its online market system as simple and stress free as possible, requesting only the most essential details - name and credit card information - at checkout so that the purchase can be made quickly and easily. This has been central to their success.

While last year much of the discussion was around how tech could be used to undermine the power of central government, this year one punter complained there were too many government representatives talking back on the hundreds of panels, round tables and debates scheduled. This reporter is on the fence.

While there were indeed quite a few state-driven talks, most weren’t necessarily explicitly partisan or felt out of kilter with the main themes dominating this year’s event. Senior White House tech adviser, Alvin Salehi, leads a team advocating open source software programmes across government and offered a insights into one of the best ways to waste taxpayers’ money: duplicative software procurement.

It’s been one of the tech industry’s most lucrative rackets for years, with major tech software providers selling computer systems to various state departments with contracts preventing them from sharing any of its elements – which might be of use to another, similar government departments. “The US government has been spending up to $6 billion per year on duplicative software,” he says.

Mr Salehi and his team have managed to achieve the unimaginable: dismantling the tech sector’s racket and changing the law so that all code is shared across all federal agencies.

This panel offered advice to social justice groups like Black Lives Matter and LGBTQ advocacy groups as to how tech can provide tools to the social justice movement. Increasing incidents where progressive content is blocked on social platforms, often inadvertently by machine learning, while the simultaneous digital organisation of the alt-right were two key subjects of the talk.

The flow of information, or lack thereof, on two potential terrorist attacks in Austin during SXSW Interactive 2018 has been a source of tension. Muted media coverage of two explosions which took place in the Texan capital city, killing a 17-year-old African-American male early Monday morning, and injuring a 75-year-old Hispanic woman on midday the same day, was criticised by many here who believed news of the attacks may have been suppressed by local officials.

But while Austin may be a liberal stronghold in an otherwise Conservative state, it’s still an American city. So violence, racial tension and easy access to arms all play their roles here like they do anywhere else. There’s another week of music, film and comedy to distract the hundreds of thousands of people who come to Austin for SXSW every year. It’s difficult to see how anything else could make the headlines.