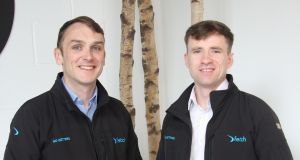 James Redmond got the idea for the delivery service, Fetch, from seeing his sister’s disappointment when something she’d ordered didn’t arrive until well after its due date. “I suddenly thought ‘why can’t retail deliveries be as quick as fast food deliveries’ and that’s the type of service I set out to build,” he says.

Fetch is aimed at retailers of all sizes and offers them a same day delivery service on demand. It operates 24/7 and Fetch drivers will collect items within a timeframe of two hours. A fleet of different-sized vehicles can transport everything from a needle to an anchor, and deliveries can be tracked via the company’s website or mobile app.

The service was launched in January 2019 and the company, which is already profitable, employs four people directly. Added to this are three software contractors and a network of 60 independent drivers.

Redmond is an electrician by trade who qualified just as the economy crashed in 2008. With work thin on the ground, he decided to go to college to study renewable energy and, while there, got bitten by the technology bug.

“I started creating my own wireframes for mobile apps and website projects and after many ideas and pushbacks I developed the concept for Fetch in 2016 and then co-founded the company with Darren Boylan and Gerard Sweeney in 2018,” he says.

Redmond is at pains to stress that Fetch is more than a delivery service.

“It’s an end-to-end delivery solution, with logistics, hardware and software elements,” he says. “For example, on the hardware side, we are tackling delivery pain points, such as difficult access to apartment blocks by installing our lockers at apartment complexes.

“We are also supplying retailers with 24-hour collection points outside their stores. This avoids customers ‘taking up’ store space when they are collecting items, which is crucial with the Covid-19 restrictions.

“Thirdly, we are offering retailers an in-store Fetch self-service delivery kiosk that shoppers can use to book and pay for a home delivery in about 90 seconds,” Redmond adds. “The kiosks are ideal for outlets selling bulky items that don’t offer same-day delivery. We have discovered from working with consumer goods clients that same day delivery can often be the deciding factor in closing a sale.”

Businesses pay for the service by buying advance credits. Credits are per drop and are based on vehicle size. They start from €2 for a bike or car delivery and retailers can buy delivery “packages” based on their needs.

So far, the biggest demand for Fetch’s service has come from florists and companies supplying prepared meals and groceries. However, big retailers such as Power City and Harvey Norman have also used Fetch and Redmond has other large retailers and department stores in his sights.

At the moment, the service is operating in Dublin, Wicklow, Kildare and Meath. Redmond is planning to expand it geographically by franchising the concept to local operators both in Ireland and overseas. The company expects to have its first international customer up and running in Dubai by the end of the year.

Investment in Fetch to date is running at around €200,000 and the company has been supported by a private investor, the South Dublin Local Enterprise Office and friends and family. The business is adequately funded for now but investment will be sought in the months ahead to accelerate its development.

Fetch hit its stride during the lockdown when demand soared.

“We went from making 1,000 deliveries a week to over 5,000 as retailers recognised we could help them combat the increasing shift to online purchasing by easing the delivery process for everyone,” Redmond says. “Our software is already sector leading but we’re not finished yet. We have plans that will turn the concept of delivery software on its head and hugely increase the value these services can offer a business.”