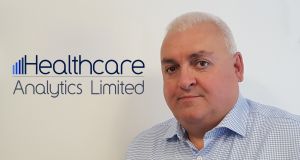 Brendan Crossey: “There are currently around 950,000 people with dementia in Ireland and the UK. That number is set to nearly double every 20 years”

Brendan Crossey has spent the last 30 years working in sales and marketing for global IT companies such as Fujitsu Services, Sun Microsystems and EMC. In September last year he took a deep breath and decided, at 50, that the time was right to start his own business.

Healthcare Analytics is based in Portadown, Co Armagh, and its focus is on using artificial intelligence and machine learning to accelerate the diagnosis of dementia and predict its potential severity in individual patients.

“Dementia is now the biggest killer in the UK, and one of the main causes of disability in later life ahead of cancer, cardiovascular disease and stroke,” Crossey says. “There are currently around 950,000 people with dementia in Ireland and the UK. That number is set to nearly double every 20 years, rising to over 2.2 million by 2051. Dementia currently costs the Irish economy around €3 billion a year.”

Crossey says the single biggest problem with dementia is getting a diagnosis.

“Currently there is no standard process for GPs to diagnose dementia. Each GP has developed their own series of assessments that can be slow to administer to often already distressed patients. Our system can transform this situation by helping GPs diagnose their patients within a standard appointment time.”

In practices that sign up to the cloud-based Healthcare Analytics platform the diagnostic process begins with a consultation with the practice nurse, who uses a smart device to capture essential patient information, perform memory tests and log in relevant medical history and test results. The data is uploaded and scored within 20 minutes, and when the patient goes in to see the doctor the results are already available.

There is no cure for dementia, but early diagnosis would allow patients to live an independent life for longer, particularly if support is available close by

There are roughly 36,000 GP practices in the UK (most with multiple doctors) and these will pay a fee of around £30 for each positive test. There is an onus on GPs to improve their rates of dementia diagnosis, and Crossey says this platform will help.

“The treatment of dementia can only start with a formal diagnosis, and in the UK the rate was only 41 per cent in 2012,” he says. “Early diagnosis and treatment can delay the onset of the disease by two years. In Ireland this would save around 3,000 lives and €500 million in healthcare costs annually as people with dementia are frequent users of the health service.

“There is no cure for dementia, but early diagnosis would allow patients to live an independent life for longer, particularly if support is available close by.”

Healthcare Analytics will launch its platform in the UK in early 2018, with Ireland to follow. Expansion to the US is planned for 2019.

To date investment in the project has been in the order of €1 million, and the company is looking to raise the same again to launch the service commercially next year.

The company, which now employs five people, was officially established last September, but work first began on the idea in 2015 as part of a project looking at how healthcare could benefit from big data analytics.

“The research was jointly funded by Innovate UK, Invest NI and Asystec, and the company essentially grew out of this project. There is no one else offering our unique combination of online and accelerated diagnosis for dementia.

“We believe that the primary healthcare model is broken,” says Crossey. “It needs to be transformed by using the latest artificial intelligence and machine- learning technologies to support the accelerated diagnosis and early treatment of complex diseases like dementia.”