In a contactless world, coins seem archaic. Have they had their day? 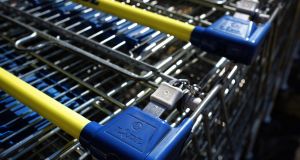 My pound got stuck in a J Sainsbury cart. After spending about 30 seconds trying to retrieve it, I asked a store employee for help.

What are coins worth? Not literally – we know a UK pound, for example, is worth $1.30. But what are they worth in terms of our time and effort?

In an age of online shopping, contactless payments and crypto currency, coins stand out as one of modern life’s most archaic features.

A hapless 15 minutes at the supermarket last week led me to question whether even the metal pound – one of the world’s highest denomination coins – was too trifling to worry about.

A lot of UK stores have a deposit system for trolleys – slide in a pound, complete your shop, return your cart and retrieve the coin. Makers of cart-lock systems say the deposit is there to incentivise people to park their trolleys neatly, not to prevent theft. Whatever.

My pound got stuck in a J Sainsbury cart. After spending about 30 seconds trying to retrieve it, I asked a store employee for help, who also failed to budge it. I already felt foolish; logic would suggest that repossessing the small coin merited minimum effort. Yet on principle – I am not sure which one – I lined up at the service desk to retrieve my pound.

Was this rational? I asked two of my children, aged 35 and 28, how long they would have waited. The eldest said, “approximately zero seconds”. The youngest said she would have given it “as long as it takes” – citing that elusive “principle”.

This hardly answered my question. So I did what journalists do. I called the two richest people I know and asked what they would have done.

First, Ray Kelvin, owner and chief executive of Ted Baker, the global clothing chain, with an estimated net worth of £468 million.

“I’d wait until I got the pound back, no matter what it takes,” growled Mr Kelvin. “It’s partly cultural, the way I was brought up. But it is also about accountability and responsibility. If a system is made to work, it needs to work, and the store needs to know if it’s not.”

Does he carry coins, I asked – and does he wait for change in a shop? “Yes” and “Absolutely”. Mr Kelvin proved one of the mythological characteristics of hyper-successful people – a visceral understanding that pennies matter.

Next, I called Duncan Bannatyne, the health club entrepreneur worth £225 million and author of books including How To Be Smart With Your Money. “I would leave the £1 in the trolley,” he said. “It’s not worth the time to get it back. But I carry change in the car for parking, and I would definitely wait for my change in a shop.”

The bit firmly between my teeth, I commissioned an opinion poll of 1,000 British people, balanced for region, gender and age. A London start-up, Attest, which produces online surveys, had offered me a free sample.

The results suggested a minority of people valued a pound coin highly. Seventy-five per cent would allow “under five minutes” to retrieve one, against 17 per cent willing, like Mr Kelvin, to give it “as long as it takes”.

There is clearly a complex emotional relationship with coinage, which transcends logic, almost as if it is hard-wired into us from the days when we buried coins in a jar. It is ironic that the best-known crypto currency is called bitcoin and is illustrated as a coin that, as a virtual entity, is anything but.

Given the pound’s former value – it has been worth $5 in living memory – it is understandable that older people venerate the coin. Only this year, it was given a new glittery design and fractionally increased in diameter. For people on low incomes, it goes without saying that a pound is more valued than by average earners.

But it will probably end up forged. And even the most basic bank account, available to the poorest, provides a contactless debit card.

Sorry, coins deserve to clank their last, with paper money not far behind. They are not even interesting any more. Until decimalisation in 1971, they were quite romantic – you often found one that was more than 100 years old and wondered what it had seen in its life. Now they are just a drag.