Sacking of Google engineer over memo a modern parable

Debates about diversity in workplace hinge on basic flaws and biases 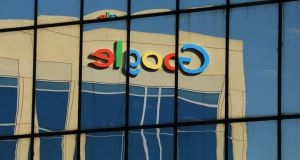 In an era when every industry is becoming an offshoot of the technology industry, and when the decisions of software engineers affect all our lives in profound ways, Silicon Valley has become a crucial ground zero in the battle for gender equality. Photograph: Mike Blake/Reuters

Occasionally, a story blows up out of nowhere that so perfectly fits the times that it appears to have been delivered from the gods as some sort of parable. The saga of the sacked Google engineer and his contentious memo on workplace diversity is just such a story.

Inevitably, it spread quickly on the internal Google+ network, and then went viral across the internet, prompting furious reactions and even more furious defences. By Tuesday, it was confirmed that Google had fired the memo’s author, James Damore, who became an instant martyr to the right-wing, anti-PC brigade, deemed to be the latest victim of our current culture wars.

For the alt-right crowd, the firing proved that big companies were intolerant of dissenting viewpoints. After all, the author was only trying to start a discussion about the efficacy of diversity programmes.

“If we can’t have an honest discussion about this, then we can never truly solve the problem,” Damore wrote, which sounds pretty reasonable, and in fairness to him, the memo isn’t strictly anti-diversity, as it has been lazily portrayed. He stresses that “I strongly believe in gender and racial diversity, and I think we should strive for more. However, to achieve a more equal gender and race representation, Google has created several discriminatory practices.”

Unfortunately, what the writer doesn’t seem to realise is that, while he may proclaim to be seeking fairness, he is part of the problem, in a very fundamental way, because at the kernel of his argument is a rather stupid fallacy.

“I’m simply stating that the distribution of preferences and abilities of men and women differ in part due to biological causes,” Damore writes, “and that these differences may explain why we don’t see equal representation of women in tech and leadership.”

That “in part” is doing quite a bit of obfuscatory work there, but the thrust of his argument is clear – women just aren’t as good as men at coding and computer engineering.

This is just nonsense that doesn’t stand up to a moment’s scrutiny. Consider that in the US technology industry, women make up about a quarter of the technical roles (at Google it’s closer to 20 per cent). If Damore’s contention that this imbalance can be largely explained by biological differences between the sexes has any truth, then we must believe that men are three times more adept at computer science than women, across the population. If this was the case, there would need to be some pretty evident neural differences accounting for this phenomenal advantage. And there just aren’t – our brains are not remotely that different. (Spatial skills appear to be the only area where male brains have a clear advantage over female brains.)

Furthermore, Damore ignores another obvious indicator that the imbalance is due to cultural, not biological, factors – the dearth of black and Hispanic men in the technology sector. Just 1 per cent of technical roles at Google in the US are occupied by African-Americans. Or are we supposed to believe they suffer from an even more extreme version of the biological disadvantages afflicting women?

But while there is basically no evidence for biological male superiority in maths or science subjects, there is an abundance of evidence demonstrating how gender biases and cultural stereotypes affect the level of women participating in STEM fields. Study after study has shown how pervasive assumptions about gendered interest in maths and science affect interest in these subjects from an early age, with girls dissuaded from pursuing these subjects and considerably less confident in their abilities than boys.

The fallacious reasoning of the memo would be bad enough, but it is made considerably worse by its plodding tediousness – suffused as it is with the thinly veiled anger of the scorned conservative who doesn’t fit in. Damore can’t seem to contemplate the possibility that this is a conversation that has already been had, that his is a position that has already been found wanting, that his perspective is not welcome because it has long ago been deemed wrong and offensive.

“People generally have good intentions, but we all have biases which are invisible to us,” he writes, oblivious to the way in which his own biases are all too visible to everyone else.

It is important here to note the very word we use to describe this issue, and how it reveals the extent of the problem – discussing the representation in technology of fully half the population falls under the rubric of “diversity”. The word betrays an implicit bias of its own – that computing belongs to men, and access to it is their gift to make.

Indeed, the debacle comes against a backdrop of persistent sexual inequality issues in Silicon Valley, with Google at the centre of a federal labour investigation into unequal pay and facing a lawsuit by 60 women alleging unfair payment practices, not to mention the widespread sexual harassment scandals afflicting the likes of Uber.

In an era when every industry is becoming an offshoot of the technology industry, and when the decisions of software engineers affect all our lives in profound ways, Silicon Valley has become a crucial ground zero in this battle for gender equality. In this sense, this saga is a perfect parable for our times, emblematic of much larger cultural tensions afflicting not just the technology sector, but society at large.

The lessons from this particular parable should be clear – how fast we can learn that lesson is another matter.