Knowledge economy may be behind low inflation and low growth 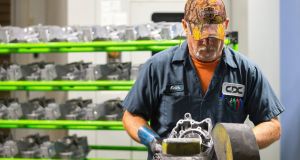 To understand secular stagnation, with its low inflation and low growth, look first at the growth of the information economy and the expansion of intangible assets.

Growth and investment in hardware like machinery have slowed while companies have boosted their investment in intangibles like intellectual property, which by some measures has gone from about 30 per cent of company capital in 1980 to nearly 70 per cent today.

The information economy means companies rely far more on intangible assets, be they the ones that walk out the door every night or the advances, systems and processes those people create. Broadly speaking, those are intangible capital or assets, and a new paper from the University of Amsterdam finds they have played a key role in shaping growth, asset prices and inequality in recent decades.

“The transition to a knowledge-based economy and the associated shift from physical to intangible capital is a primary cause for the rising excess savings over productive investment in advanced economies, presented in the ‘secular stagnation’ hypothesis,” write Robin Dottling, a PhD student, and Enrico Perotti, a professor of finance.

“Falling interest rates and rising long-term asset values can be interpreted as a direct consequence of this gradual process. Critically, the approach also allows [us] to interpret the growing share of income gained by innovators, the progressive reallocation of credit from productive to asset-financing uses [primarily for housing] and the rise in household leverage.”

Economists have long noted the growing importance of intangible assets, leading some to posit that their growing role on balance sheets makes it harder for companies to borrow and invest.

Banks, after all, may be less willing to lend against a patent or a process than a turbine. That, in turn, has led companies to build up cash on balance sheets, the argument goes.

But in a world in which Tesla chooses to borrow $1.5 billion in junk bonds to fund production of its new model, rather than selling its very expensive equity, and Brazilian oil giant Petrobras can easily sell a 100-year bond, the claim that companies are just being conservative because banks won’t lend is tough to swallow.

This argument is also better at explaining trends in capital expenditure than those of asset prices and rising economic inequality.

In Dottling and Perotti’s view, both intangible capital and skilled labour have outpaced the broad economy in productivity growth. This sounds correct: someone writing the code for a 3D manufacturing process is improving productivity by a higher percent than the 3 per cent annual growth we’ve traditionally seen in manufacturing. The same is also true when comparing the employees of Facebook and those of the typical university.

With more improvement in productivity coming from intangibles, companies are increasingly investing in them, a process that implies lower capital expenditure. While the market price of a hot-shot coder has sky-rocketed, you only tend to pay them out of their own improvements once they are demonstrated, however, reinforcing the cycle of lower capex and borrowing.

Those “innovators” capture more of the value of intangible assets, and the overall impact is to drive down the supply of assets with which to save. This pushes asset prices higher, and interest rates lower, as too much money is chasing too few assets amid too much credit.

It also helps to explain growing inequality as companies channel pay to creators of intangible capital rather than the typical person carrying out the processes they create.

Since excess savings have fewer assets to buy, more ends up in real estate. Mortgage debt rises as unskilled labour, not sharing in productivity gains, must stretch more to afford shelter.

All of this at the very lest rhymes very well with what we observe in the economy.

Consider the robber barons of 100 years ago; the great steel, oil and automobile companies were hugely capital intensive. Autonomous cars will be, in contrast, similarly innovation-intensive.

If all this is true, some possible implications stand out: Secular stagnation may be here to stay, at least until the intangible economy starts coming up with projects that require huge capital investment.

Monetary policy may be fighting a losing battle to spark investment and build inflation and lower-skilled wage growth. Blowing up bubbles in housing, for example, to put less- skilled people to work, will, as we’ve seen, end badly.

Taxation and redistribution may end up the only way to let the market work in producing innovation and also reach a democratically acceptable-allocation of the proceeds.