The main tool needed to work in the gig economy? A smartphone. 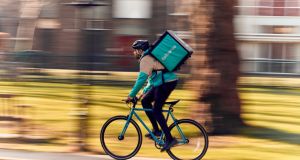 A Deliveroo worker goes about his business. As the law tries to catch up with the technology, a couple of companies dig their heels in – Air BnB, Uber, Lyft, Deliveroo, TaskRabbit, Deliveroo. Photograph: Mikael Buck/Deliveroo

In the 2011 bestseller The Master Switch, author Tim Wu argues that, throughout history, communication technologies tend to move from at first being a “freely accessible channel, to one strictly controlled by a single corporation or cartel”.

In other words, any new communication medium almost inevitably moves from an “open to closed system”.

UX/UI Design Lead, Alan Dargan from Digital Skills Academy in Dublin’s Digital Hub, put it another way: “Emergent technologies run in cycles: first through a giddy period of optimism – when the possibilities are endless – before finally ceding to an entrenched oligopoly.”

This trend is blatantly obvious when examined in the context of the internet. A significant majority of the world’s population don’t search for information on the world wide web – they search for Google’s interpretation of that information.

The gig economy, a burgeoning business model made possible by advances in digital communications technology, somewhat reflects Wu’s hypothesis, albeit in an economic setting. As it grows exponentially, and remains largely free from state-led interference, lawmakers scramble to keep up through attempts at enforcing regulations no longer fit for purpose onto the new business model.

As the law tries to catch up with the technology, a couple of companies dig their heels in – Air BnB, Uber, Lyft, Deliveroo, TaskRabbit etc – and take as much market share (by any means necessary) as they can before the ‘fat cats on Capitol Hill’ finally get with the programme.

Is Uber or any other gig economy enterprise leader exploiting the current lack of regulation and mistreating some workers in some situations?

Of course they are.

But the wider vitriol for the gig economy by trade unions etc stems not from some altruistic compassion for all workers – unions have only ever protected one kind of worker in one kind of workplace anyway – it’s that the establishment rarely looks favourably upon emerging sectors that can’t be regulated, safeguarded and effectively controlled by the existing ruling elite.

Businesses considered to be part of this new ‘gigging’ sector share a number of common traits. Most important are in-app payment systems and ratings-based marketplaces.

Cash-free financial transactions may already be the norm for most people but none more so than millennials. As one 25-year-old put it to me the other day, “the only thing people use cash for anymore is to buy drugs”.

The facility for a customer to provide ratings-based feedback on a purchase isn’t novel either, having been acutely entrenched in the online marketplace by Ebay.

However, Uber or AirBnB’s literal and figurative distance from its “staff” means customer ratings are absolutely fundamental to the continued success of an economy so decentralised, it would give Scottish classical economist, Adam Smith cause to consider a revised edition of The Wealth of Nations.

If The Terminator’s position (as a cyborg assassin from the future returning to the present to save civilisation from mistakes made which would ultimately lead to a post-apocalyptic future) were to become tenable, maybe the gig economy could be just what Arnie needs to fill the gap in steady income until another suitable post-apocalyptic time travelling position that he’s a suitable candidate for comes up on LinkedIn.

The technology private companies have mastered in order to exploit the gig economy model is yet to be mastered by government.

A recent article in Nature Magazine penned by Tom Mitchell & Erik Brynjolfsson states: “The private sector is increasingly adopting different approaches to generating data and using them in decision-making, such as A/B testing to compare alternatives. And technologies that protect privacy while allowing statistical summaries of large amounts of data to be shared are increasingly available… Much of the data needed to spot, understand and adapt to workforce challenges are not gathered in a systematic way, or worse, do not exist. The irony of our information age is that despite the flood of online data, decision-makers all too often lack timely, relevant information.”

What’s happening under the bonnet is not our focus here though. Like the driver of the car used by an Uber driver doesn’t need to be a mechanic to go from A to B, nor does any gig economy worker need to be au fait with the internal workings of the technology underpinning gig economy businesses. They do, however, need a smartphone and/or laptop, an internet connection and a very basic level of computer literacy.

Of course, this ignores the fact that one must own a car for ride sharing, or a home for Air BnB, immediately excluding a significant number of people from the new game in town. In addition, research (which, at this point, is thin on the ground) does suggest gig economy beneficiaries tend to be middle class, educated professionals who probably don’t need the extra income generated for anything other than going on that second holiday or saving for an extension.

Regardless, digital skills deficits, misguided government regulation and a lack of information are also preventing some people – who could really benefit from the additional income generated from renting out their spare bedroom – from getting involved.

The main tool needed to work in the gig economy? A smartphone. The main skill set needed? The ability to turn that smartphone on and off, so user friendly are many of these apps.

Nevertheless, some people, myself included, still need to be physically shown at least once how to operate any new technology.

Which makes you wonder: if Ireland’s trade unions truly represent all workers in society, shouldn’t they be providing one-day training courses entitled – ‘The Gig Economy For Dummies?’

It could be one way to help reduce the number of folks on the live register.